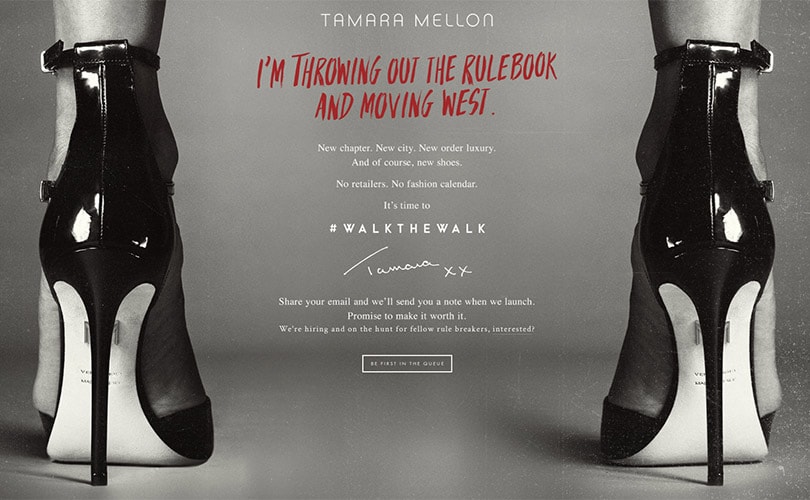 Tamara Mellon is said to be preparing for her big return to the industry next month, as the footwear designer is set to relaunch her eponymous brand online this October under a direct-to-consumer business model.

The new structure is said to remove all wholesale accounts and see Tamara Mellon offers it products exclusively through its new e-commerce site, which is currently under construction. "Three years ago, [when I launched my line], I did ‘buy now and wear now,’ but the industry wasn’t ready for it," said Mellon to Footwear News. "I’m now doing direct to the consumer and delivering things monthly that you would want to wear in that season. No collections. I’m excited to deliver shoes to women in a way that they actually shop."

News of her relaunch follows on from when the London-born designer filed for voluntary Chapter 11 bankruptcy in late 2015 in order to pay back her creditors. The namesake company exited from bankruptcy later on in early 2016 and Mellon succesfully completed a 12 million US dollar Series A round of funding this July, which was led by Chevy Chase, from New Enterprise Associates. The co-founder of luxury footwear brand Jimmy Choo also made the decision to relocate her business from New York to Los Angeles as part of her scheme to emerge from bankruptcy.

Mellon also hired former Backcountry.com CEO Jill Layfield as the companys' new chief executive. "Jill is not from a traditional fashion business," said Mellon. "But she knows how to build a business online. That’s what I’m looking for." During Layfield's tenure at Backcountry.com, she was credited with helping the company's annual revenue increase from 30 million US dollars to hit 500 million US dollars. Although Mellon's eponymous has fought to stay afloat, the London-born designer is positive her brand will succeed this time.

"The customer gets to see something today and wear it tomorrow. This is how the next generation of luxury brands will be built,” Mellon said. “I will have no wholesale margin in my product, so just amazing quality with competitive prices.”