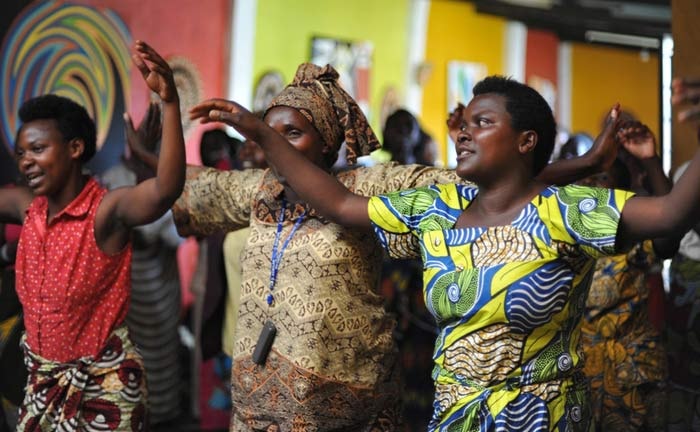 Here is the second in my series reporting from FIT’s commendable Summer Institute program. I should mention that FIT’s Acting Associate Dean of the School of Art and Design, Sass Brown, is someone who is making a difference herself, as her extracurricular activities are as influential as her work at FIT; she is a prolific writer, activist, blogger, journalist, board member of Fashion Revolution, and by my estimations, all-round eco-warrior. She moderates today’s panel on the topic of “Artisan Economy.”

Artisan employment is second only to agriculture in the developing world and is worth an estimated 32 billion dollars. 65 percent of all artisans live in the developing world. The Unesco definition of artisanal products: those produced either completely by hand, or with the help of hand tools or even mechanical means, as long as the direct manual contribution of the artisan remains the most substantial component of the finished product. 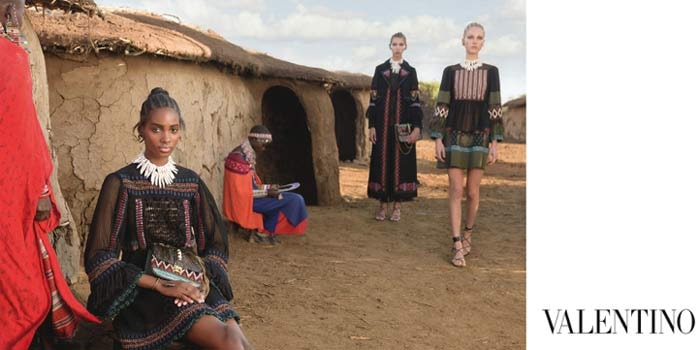 Artisan is the height of fashion

As founder of the Alliance for Artisan Enterprise, it is Peggy Clark’s opinion that the word artisan is currently the height of fashion. She invokes the Valentino S/S 2016 ad campaign which features western models positioned in a typical Kenyan setting, bedecked in tribal-inspired embellishments, while a member of the Maasai sits in the background, beading. Clark’s sees her job as lessening the distance between the girl in the designer dress and the villager whose craftsmanship enhances the beauty of the dress.

Her work is varied and no day is a typical one. She begins with a story of how she helped change the fate of severely endangered cow breed native to Rwanda and Kenya. When the value of the cow horn was considered and introduced to the world of eyewear, the demand led to the animal being saved. Just this week, she saw beautiful frames made from the material in Warby Parker. 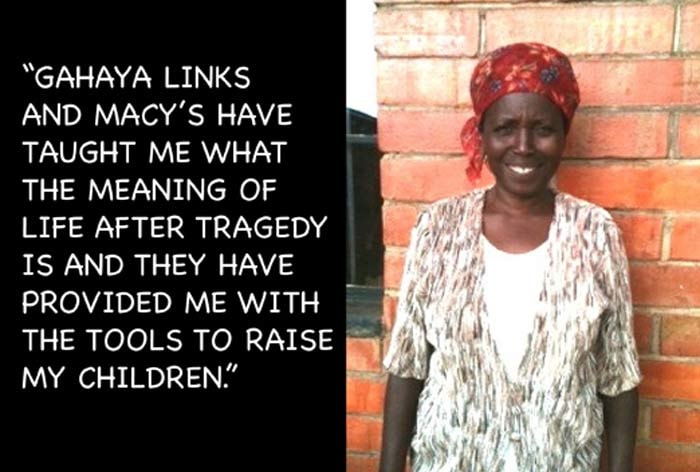 Macy’s/Gahaya Links woven baskets is another example of a successful partnership between a retail giant and small artisanal businesses in Rwanda, a country torn apart by conflict. It is a partnership that has been going strong since 2005.

“It’s fun,” says Clark, but adds, “It’s very messy and it gets complicated.”

Within the fashion industry, she sees major gaps in knowledge and it’s frustrating that often the revenue does not always flow to the needy producer. Terms of trade are often not good for the artisan. A corporation might request the weaving of a healthy run of bags, but if the artisan is forced to wait 90 days from delivery to receive full payment, he can be left destitute. Dependent on that income, he has no access to a credit source while he awaits payment; there are no small business loans, and often he has no bookkeeping skills.

Rebecca van Bergen, founder of Nest, estimates that up to 60 percent of our clothing is made by subcontracted women who work from inside their homes. They do cut and sew products, beading, make buttonholes, for an average wage of 1.80 dollar per hour, which is 50 percent less than a factory worker. But they are preserving skills passed down through generations, and the work can be a form of female, as well as financial, empowerment. Studies have also shown that repetitive handwork of this nature has the same healing benefits as meditation. 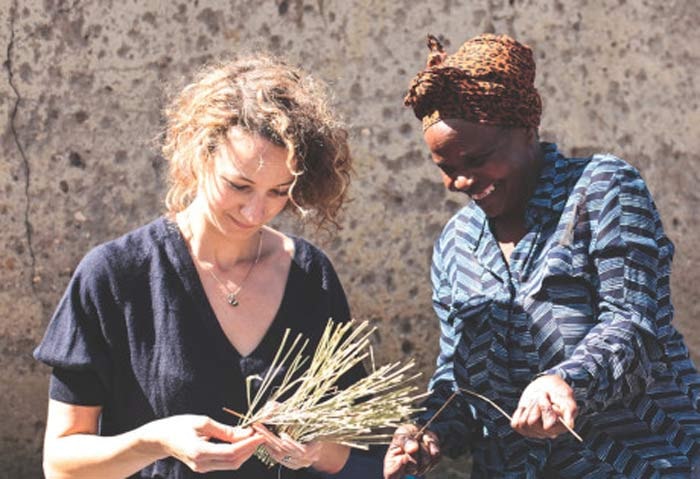 Nest works, among others, with the fashion industry’s superpower, the Kering Foundation, which regularly sends its designers to spend several weeks volunteering with artisan businesses to smaller ethically minded companies such as New York-based Maiyet for whom she sourced artisanal silk jacquards.

How to manage and standardize 4000 basket weavers scattered across 6 Philippine Islands, all working from their homes, is the sort of question she ponders daily. She also steps in when companies are running into problems working with the developing world. For example, Varanasi Silk is woven underground in areas of North India to a centuries-old tradition, but when the fabric deliveries were delayed, Nest investigated and found that during monsoon season, it is too hot to weave underground. The workers, often with many children to care for, and needing to continue working from their homes, found it impossible to complete the order. So Nest worked with an architect and had a state-of-the-art silk-weaving facility built on-site.

From venture capitalist to goat herder

Matthew Scanlan, CEO of Naadam Cashmere, is an ex-venture capitalist who approaches artisan enterprise with the same straightforward business mind that he relied upon in the finance sector. After turning his back on that career, he found himself at the center of “a wacky experience” in Mongolia which took him to the depths of the Gobi desert where he made the acquaintance of nomadic goatherds. In fact, he became one for a while.

The experience persuaded him to build a non-profit organization to benefit their industry. He realized the two best ways to help were to invest in the health of the goats, and to give back directly to the workers who harvest the cashmere. He observed corrupt middlemen and agents who were undercutting the farmers, then selling high to market. Scanlan, tapping into his career skills, sourced investment and bought the cashmere at a higher price, effectively cutting out the middlemen. As advisor on the Gobi Revival Fund, he witnessed how each farmer’s family saved about $1200 through the organization’s investment in veterinary programs and increased revenue from the harvest, providing a massive boost to the local economy.

While the capitalist in him finds this rewarding, he cautions that helping the artisan should never come from a “colonialist perspective,” or be about what we think is best for those communities. He says he goes there, listens, and asks questions. They know their traditions better than anyone. They listen to their elders before outsiders. “We leave them to do what they do best, which is herding goats,” says Scanlan, then he ships the cashmere to be spun into yarn in Biella, Italy, but returning it to Mongolia for production.

Scanlan knows the importance of price to today’s customer is key to their success, no matter how soft and durable his cashmere. But he warns that in order for us to get that 60 dollars versus 75 dollars cashmere sweater, his goatherds would have to grow their herd, which, not to put too fine a point on it, would cause desertification which ultimately changes the environment.

All three of these committed professionals are faced daily with enormous challenges, no matter how much good will there seems to be about what they do.

“Europe is way ahead of us,” says Clark. “We owe a lot to Simone Cipriani’s Ethical Fashion Initiative.” While agriculture receives huge investment, Clark notices a startling lack of it going to artisan industries. She refers to “an efficiency challenge, a branding challenge” but also to the “very serious poverty challenge” that is at the heart of the artisan business. Even within their communities, there are modern threats to the traditional skills. Some younger members don’t want to do the work of their forefathers, choosing perhaps instead to pull a rickshaw for a living so they can learn English, or to work in a call center so that they can feel part of a global community.

But she says that sometimes the simplest action, something like a New York designer requesting a “Western colorway” in goods that have been created in the same colors for generations, can be enough to make the craft seem new and alive in the eyes of the next generation.

Actions that might seem small, when added together, can become meaningful. 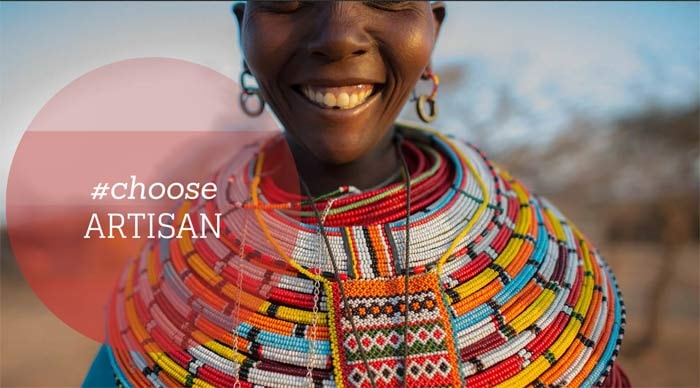