People who menstruate have an average of 450 periods over their lifetime, according to the U.S. Association of Reproductive Health Professionals. In the United States alone, 42 million people use tampons regularly, as stated by the 2017 Simmons National Consumer Survey. Considering the average period lasts five days, if Americans use three tampons a day during their periods, they will throw away 283.5 billion tampons in the course of their lifetime.

The problem is, tampons are not recyclable, and many of them come with plastic applicators which can take several decades to biodegrade. Menstrual pads are even worse: their plastic parts can take up to 500 years to biodegrade if sent to landfill. In its 2016 beach clean-up, the UK Marine Conservation Society found 20 tampons and female sanitary items per 100 meters of shoreline.

Luckily, a growing number of consumers are becoming aware of the environmental impact of female hygiene products, which is why several companies have been launched in recent years to offer alternatives such as the menstrual cup and period-proof underwear.

While each period-proof underwear brand claims to have its own, patented technology, this kind of undergarment usually features several layers of absorbent and antimicrobial fabrics. To wash the panties, wearers need to rinse it immediately after use, then wash it separately in the washing machine without softeners.

The technology still can’t replace disposable hygiene products entirely: shoppers with a heavy flow are advised to use the panties as a backup to their usual routine. However, these products can contribute to a significant reduction in tampon and menstrual pad use, which puts these fashion companies in direct competition not only with other undergarment brands, but also with the hygiene industry.

FashionUnited spoke with three brands of period-proof underwear: Thinx and Dear Kate, from the United States; and ModiBodi, from Australia.

Thinx is one of the most successful fashion companies offering environmentally-friendly alternatives to disposable menstrual products. Founded in 2014 after 3.5 years of research and development, the company now employs 35 people in its New York office and its revenue reaches into the tens of millions of dollars. Thinx underwear is sold online, via shethinx.com, at Selfridges and premium retailers in the US, Australia, France and Germany. A new employee was hired in April to help the company to grow its wholesale network.

The secret to Thinx’s success? Bold advertising campaigns. The brand is never shy to stir up debate about the taboo around periods. The company gained popularity in 2015, after its proposed ads for the New York subway were not approved due to the use of the word “period” in the sentence “underwear for people with periods”. The phrase was accompanied by a series of photographs which were suggestive, yet not sexualized: a grapefruit, a papaya cut in half, egg yolk dropping. 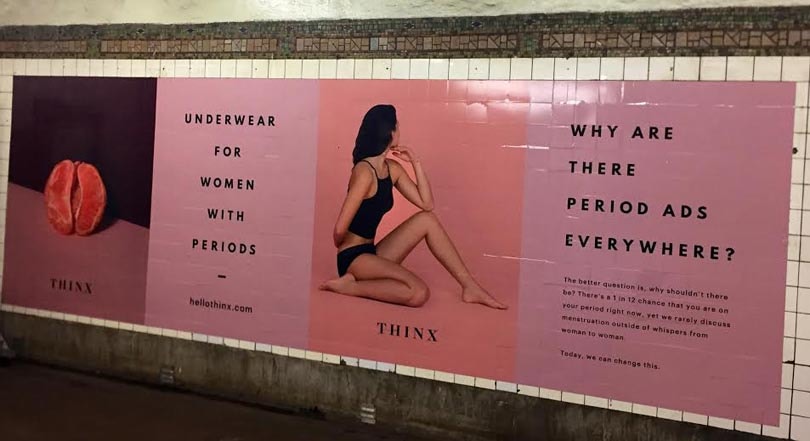 Thinx’s director of marketing, Veronica del Rosario, told news website Bustle at the time that a male agent from the New York Metropolitan Transport Authority (MTA) justified the rejection by asking her what would happen if his little boy saw the ad. His attitude appalled Thinx’s customers, who started a campaign on social media demanding the MTA to run the ads. “It went viral, the press picked it up internationally,” recalls CEO Maria Holland Selby, who joined Thinx last year after holding senior positions at eBay, Reuters and Dow Jones. The outcry was so widespread that the MTA did revise its decision in the end.

But those images still cause a stir three years after the incident. “We recently made a campaign in which we drove a store on wheels from New York to Chicago to Denver and then to Dallas. Our pictures were printed on the outside of the truck, including a lovely one in which women from different ethnicities hold each other. In Dallas, for example, we couldn’t get a parking permit. We don’t know why,” Selby told FashionUnited over the phone. “Although we did receive a positive response from many passersby, there have been people on the street calling the images ‘disgusting’. The reaction tends to vary per region, of course”.

The company’s goals go far beyond opening a feminist conversation, however. According to the CEO, Thinx was created to address a perceived lack of innovation in the feminine hygiene space. “The big companies were not interested in innovating because they didn’t have to. Female hygiene products form a 40 billion dollar market worldwide, 6 billion just in the US. However, there is a growing number of consumers who are aware there is a pressing need to reduce the use of disposable products. Tampons and pads constitute 7 percent of the world’s landfills, up from 2 percent 20 years ago,” said Selby.

Thinx’s goal, therefore, is to never stop innovating. The company, which launches 5 to 6 new products a year, has just obtained FDA approval for a reusable tampon applicator, to be launched next year. 2019 will also mark its first collaboration with a prominent fashion designer, still to be announced.

Furthermore, a collection of panties for tweens (girls aged 10 to 14) is in the works for September. “Customers were coming to us asking for a product for their daughters,” explained Selby. The tween period-proof panties will come in two styles, two colors and one print, all in organic cotton -- something that is “very important for moms”, according to Thinx’s CEO. A separate e-commerce website will be dedicated to the new line, which is set to retail for 59 US dollars (starter pack with three panties) or 23 dollars for a single piece.

One of Thinx’s competitors is a neighbor: Dear Kate, also headquartered in New York City, was founded in 2012 by chemical engineering student Julie Sygiel. She raised over 150,000 US dollars on Kickstarter for one of the brand’s first collections in 2015, as well as 1.7 million dollars in funding. Earlier this year, Dear Kate was acquired by Monthly Gift, a tampon, pad and liner subscription service connected to a cycle tracking app. “We want to make sure our customers have the best choices available to them, no matter what shade of green they might be,” said Monthly Gift in a statement upon announcing the acquisition.

While other period-proof underwear brands may still include a plastic layer in its products, Dear Kate guarantees that its lining, called “Underlux”, is 100 percent made of fabric. The company also makes sure to source and manufacture its products locally. In fact, it is as local as it can be: all Dear Kate’s products are made in New York. “We are committed to responsible manufacturing and handle our resources and ordering very closely to help reduce our carbon footprint,” said LisaMarie Lawrence, Monthly Gift’s Co-founder and COO, in an email to FashionUnited. Thinx’s underwear, for example, is made in Sri Lanka and Spain. “While we are excited to grow and always want to keep up with demand, we also want to be sure none of our materials go to waste, which is why you will sometimes see low inventory on our site,” added Lawrence.

In addition to underwear, Dear Kate offers dancewear and activewear: yoga pants, leggings and leotards are also part of the brand’s collection. The aim is to cater for those who want to feel extra safe during workouts. “Beyond expert coverage during your period, Dear Kates offer everyday piece-of-mind,” says the brand’s website. 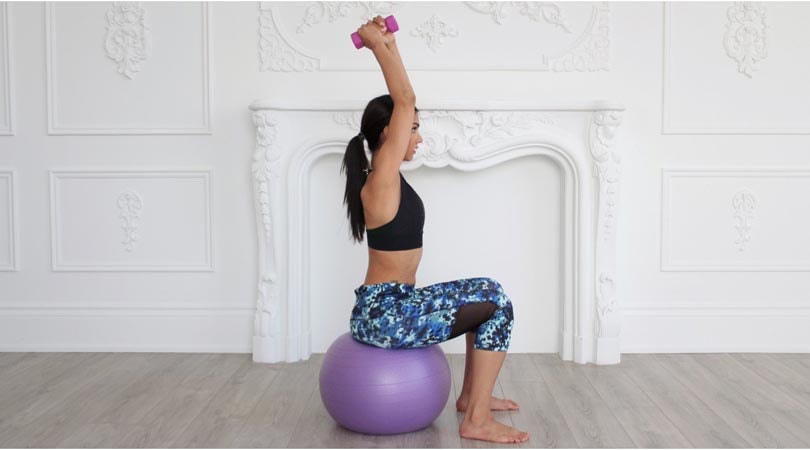 Although much smaller than Thinx (the company currently employs a team of seven), Dear Kate is also doing well. “We couldn’t be happier with our performance. While we aren’t ones to kiss and tell, a style that just hit the shelves last week sold out overnight,” noted Lawrence, adding that Dear Kate’s customers are “hugely loyal”.

Dear Kate has also had its fair share of controversy when it comes to advertising campaigns. The brand made headlines in 2014 thanks to an ad in which female tech executives from Silicon Valley wore Dear Kate’s underwear. “We feature women in our campaigns who we admire because of who they are and what they do, not because of what they look like,” Sygiel told Fortune magazine at the time. “We like to show women in our campaigns actually doing things, not just standing there and looking sexy”. Although the campaign was considered edgy four years ago, Victoria’s Secret plummeting sales and the success of Rihanna’s inclusive lingerie line demonstrate that Sygiel’s discourse actually resonates with a significant number of consumers.

Australian brand Modibodi was launched in 2013 by Kristy Chong, a former PR executive who’s held senior roles at McDonald’s, Sanofi-Aventis and Edelman PR. The business idea was inspired by Chong’s own personal experience: “I had two children and was doing lots of traveling and running. On one of those runs I realized that my underwear was failing to protect me from the common ‘taboo’ of what is commonly known as light bladder leakage,” she told FashionUnited. “I began to question whether underwear was as good as it could be and why, with all the advances in technology, our underwear had not evolved.”

After speaking with friends and family, Chong realized she wasn’t alone. “Most women put up with failing underwear or turn to irritating, unattractive, inconvenient and eco-damaging disposable options to stay dry and fresh,'' she said. Chong then went on to design underwear which would protect wearers against sweat, odour, bladder leaks and menstrual flow -- a wider proposition than most companies of the genre. The broader approach is reflected on the brand’s product offering as well: while most competitors sell underwear only, Modibodi also offer activewear and swimwear, as well as tops and bras for breastfeeding mothers. “I wanted to allow the Modibodi range to address multiple areas of a woman’s life,” explained Chong.

Now, after having sold over 500,000 garments to approximately 85,000 customers, the company is looking to expand in the US, UK, Singapore, Japan, South Africa, South Korea, UAE, Israel, France, Germany and New Zealand markets, with Europe as the top priority. “We have set up a warehouse in the UK so that our UK and EU customers can get their hands on Modibodi quicker,” told Chong.