7 things you should know about the global activewear market

London - Although some may say the global market for activewear and athleisure is reaching a saturation point, data shows otherwise. The billion-dollar athleisure wear and activewear trend is still going strong, especially ahead of busy holiday season as female shoppers across the United Kingdom and United States turn their focus to exercise and healthy living. Retailers across the UK and US have increased their activewear offerings by 22 percent, which has led to a 27 percent jump in full-priced sell outs, according to the latest results from retail research company Edited. After analysing over 2,600 brands and retailers which offer close to 90,000 activewear and sportswear products over the past two years, Edited shares its list of the main seven trends, changes and themes to emerge in the activewear and athleisure wear market.

Nike, Adidas and Under Armour on the top of their game…

Unsurprisingly major sportswear brands are still leading the way and on the top of the list then it comes to market share. Nike remains the most-stock sportswear brand online, followed by Under Armour, Adidas Performance, Asics and Adidas. Almost all of the brands witnessed triple digit growth in the last three months compared to the same period in 2015, highlighting female shoppers increasing demand for authentic sportswear online.

For those still unaware, US artist Beyoncé previously teamed up with Topshop to create her own athleisure brand Ivy Park - which was a big hit. Launch this April, Ivy Park is already the eighth most-stocked activewear brand this year, in spite of consumers concerns with sizing and sweatshop allegations, accusing the brand of paying its seamstresses in Sri Lanka half of the national average wage.

…leading to the rise of non-traditional brands

Even though sportswear brands are still leading the pack when it comes to active wear and athleisure products, non-traditional brands are quickly catching up. In addition to Beyoncé’s Ivy Park, high street giants Zara and H&M have also released active wear lines this year. With the average price of an item costing 22 pounds at Zara and 14.99 pounds at H&M, is should come as little surprise that these lines are in increasing demand, especially for women who may just be starting out with a new fitness routine or gym class.

Even though denim sales are slipping in Western Europe and the United States, jeans are making a comeback, thanks to the rise of performance denim and comfort denim. In fact, according to data from Edited, athleisure retailers increased their jeans offering by 15 percent and witnessed a 46 percent increase in full-price sell outs. This highlights that although women are buying sportswear pants, leggings and short, women are still buying and wearing jeans. 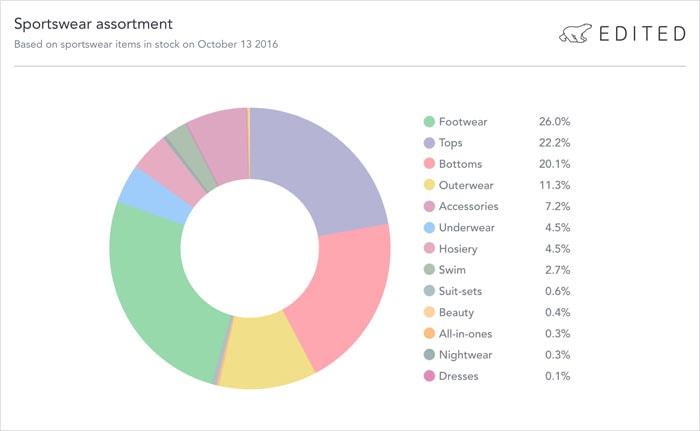 …although leggings are set to hit their peek

Skinny jeans may be becoming less popular, but shoppers love for leggings is only set to grow as the item continues to be a popular item in activewear. Interest in leggings has increased 116 percent from Q3 2014 to Q3 2016, with spikes in sales taking place each January for the last two years - inspired by New Year’s resolutions perhaps?

Footwear is the largest sportswear category…

Trainers have already overtaken high-heels sales within the UK, so it should come as no surprise that one quarter all stocked sportswear online is footwear. Over the past two years the three largest product categories within sportswear have been footwear (26 percent), followed by tops (22.2 percent) and bottoms (20.1 percent), which together total 68.3 percent of all sportswear items stocked by retailers.

Although trainers are the largest sportswear category, crop tops have been seeing a strong growth recently. Activewear crop tops have steadily increased in popularity, increasing a whooping 296 percent from Q3 2014 to Q3 2016, as women across the UK and US darn to bare more skin than before when hitting the gym.

“Our extensive analysis shows that activewear is not a saturated market - rather, with more newcomers it’s an aggressively competitive and growing industry,” says Katie Smith, senior retail analyst at Edited. “Whether it’s launching new labels or the latest stretchy denim styles, activewear is a must-have in closets worldwide.”