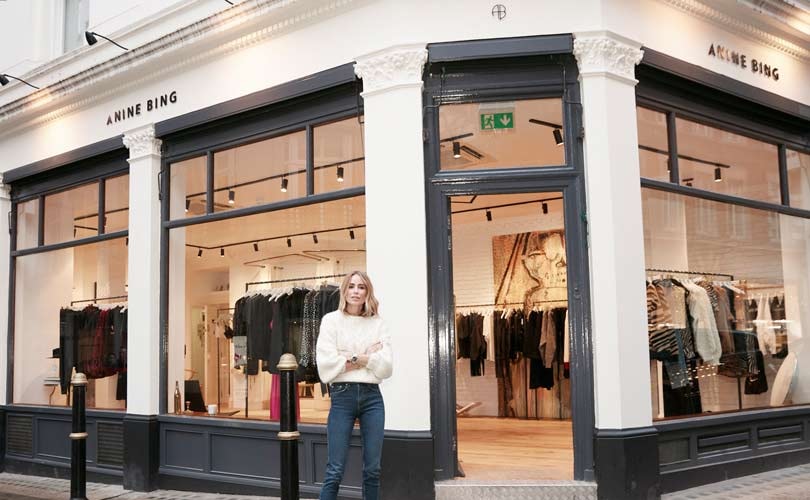 Anine Bing on building a brand for the modern woman

If you are looking for a label to watch in 2019, make it Anine Bing, the eponymous label from the LA-based influencer-turned-designer, has grown from an initial collection in 2012, consisting of just 15 pieces to a global brand in six years with flagship stores located in Los Angeles, New York, Paris, Madrid, Barcelona, Berlin and Antwerp, with the tenth opening in London’s Mayfair earlier this month.

This is a contemporary womenswear label that has turned the social star’s timeless Scandinavian meets rock’n’roll style into a coveted luxury brand that has big plans to expand its reach in 2019, including adding a further 5-7 stores next year, introducing additional categories, as well as expanding its team based in LA, after closing a 15 million US dollar Series A financing round in August led by Index Ventures, Greycroft Partners, and Felix Capital.

FashionUnited met with Anine Bing to discuss the brand’s recent investment, the design philosophy that’s made the brand an instant hit, as well as what’s next for the American label, at her new London flagship, which has been designed to feel like a “downtown Los Angeles warehouse”.

“I fell instantly in love with the windows, it is just very bright, and floods the store with such beautiful natural light,” explained Bing about the London store’s location on Grosvenor Street in Mayfair. "I also love the location, so cosy and amazing, and the store design is like stepping into my house, with the Turkish rug, art from the same artists - I wanted it to feel personable and for people to almost experience a bit of my lifestyle.”

Bing added: “We have a shop-in-shop in Harvey Nichols that has been doing amazingly for us and I just love London as a city and I felt like it would be so good to have a store here - it really is dream.” 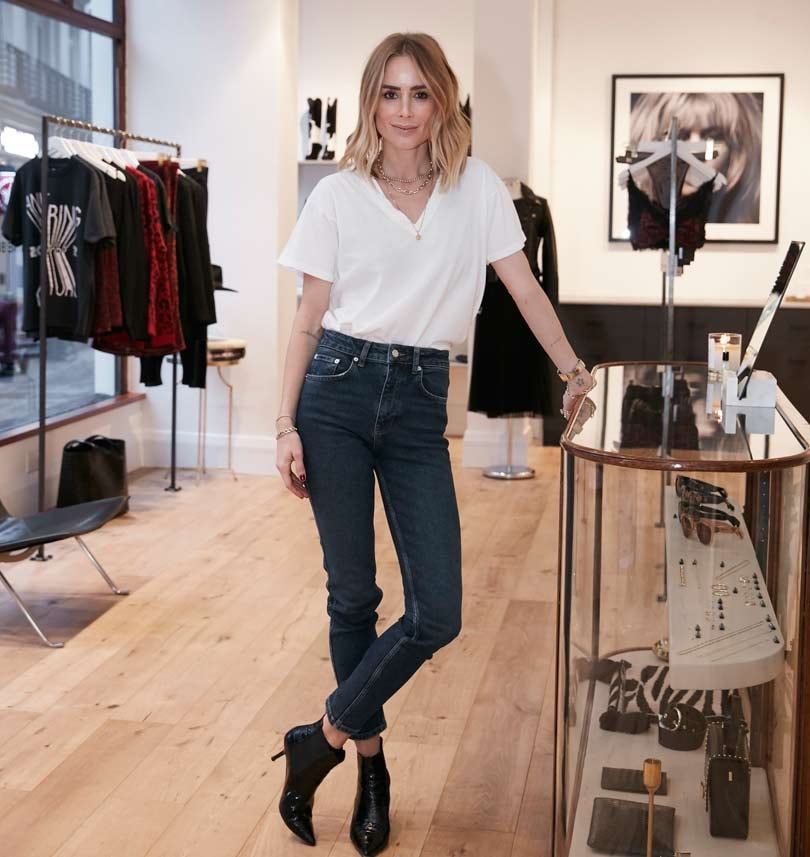 Adding a retail footprint is very much part of Anine Bing’s growth strategy plan, while some brands are shying away from the high street or cutting the number of stores, Bing stresses that while the label started as an e-commerce business and that’s “great in reaching a wider audience,” the retail stores are “bringing the brand to life”.

Bing added: “Some people like to come in and feel the products, and I just think it makes sense to have both e-comm and stores. I know some brands are struggling with their stores, for us they’ve been working well, so we will just continue opening more.

“We are also in such great addresses around the world which means that new people discover the brand, who probably wouldn’t via the website, our foot traffic in our SoHo store in New York is amazing. I just find that the retail and the e-comm really feeds each other.”

While Bing couldn’t confirm exact city locations for the upcoming stores, she did state that they would definitely be looking to open more stores in Germany as the Berlin store is “killing it”, and that targeted store locations comes back to where the e-comm demand is, so Europe, the US, as well as Australia, which she added is a “huge market and has been since day one”. 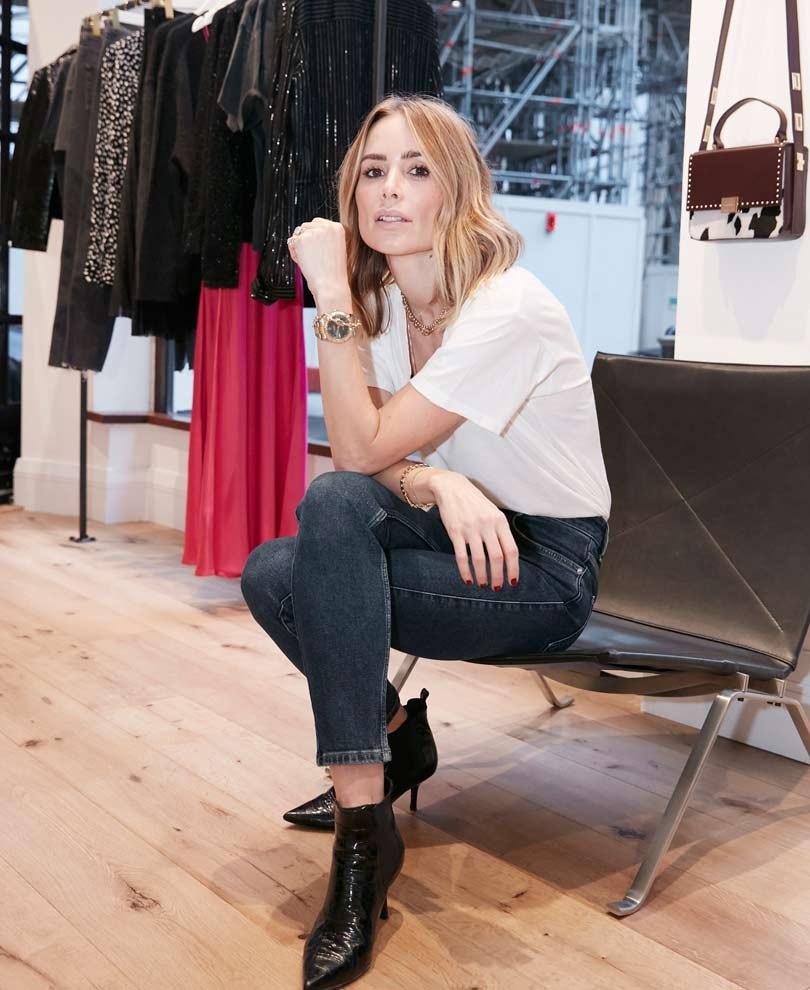 Bing’s approach to the aesthetic of her namesake label is to make it “easy and effortless” and she has really tapped into providing for the modern woman who is shopping for luxurious staples, elevated wardrobe basics as well as statement party pieces and key seasonal pieces, offering everything from blazers and jeans to leopard print knits, leather trousers, rock’n’roll inspired T-shirts and her now iconic Charlie boot, which is one of the brand’s bestselling pieces.

“I want to design what modern women really want,” expressed Bing. “I want to make it easy for the modern woman, as she is busy, she is working, she might be a mum, there is so much going on in her life, and there is no time to stand in front of your mirror thinking about what to wear for an hour.”

Bing added: “I just want to make women feel powerful and good about themselves. I want my customers to invest in the pieces so they can stay in their closets and they can wear year-after-year, season-after-season.

“Women aren’t coming to us for that trendy piece they can get that everywhere else, here I want to create a wardrobe that will last a long time, we are tailored women who are fashion forward and want to wear their lifestyle.”

One of the first pieces that Bing designed was a pair of jeans. Her quest to find the perfect pair was one of the reasons she started her brand, and now targeted a bigger share of the denim market is a big goal for the brand.

“Denim is the one of the reason I started the brand, as I just love denim,” added Bing. “I probably had 100 pairs in my closet but none of them were 100 percent perfect, I liked the legs from one, and the pockets from another, so, that was the first piece I designed, and still today it is my favourite thing to do, as it feels so good to put on a good pair of jeans.”

It was a challenge, added Bing: “I wanted to find the perfect fit, but it is also about the feel of the denim, I found a lot of them to be too stretchy, I know a lot of women like this, like super jegging jeans, but it wasn’t for me, I wanted something that fitted and felt like real denim with a tiny bit of stretch.

“I get to create denim that I love and I’m constantly looking at ways to develop the line.” 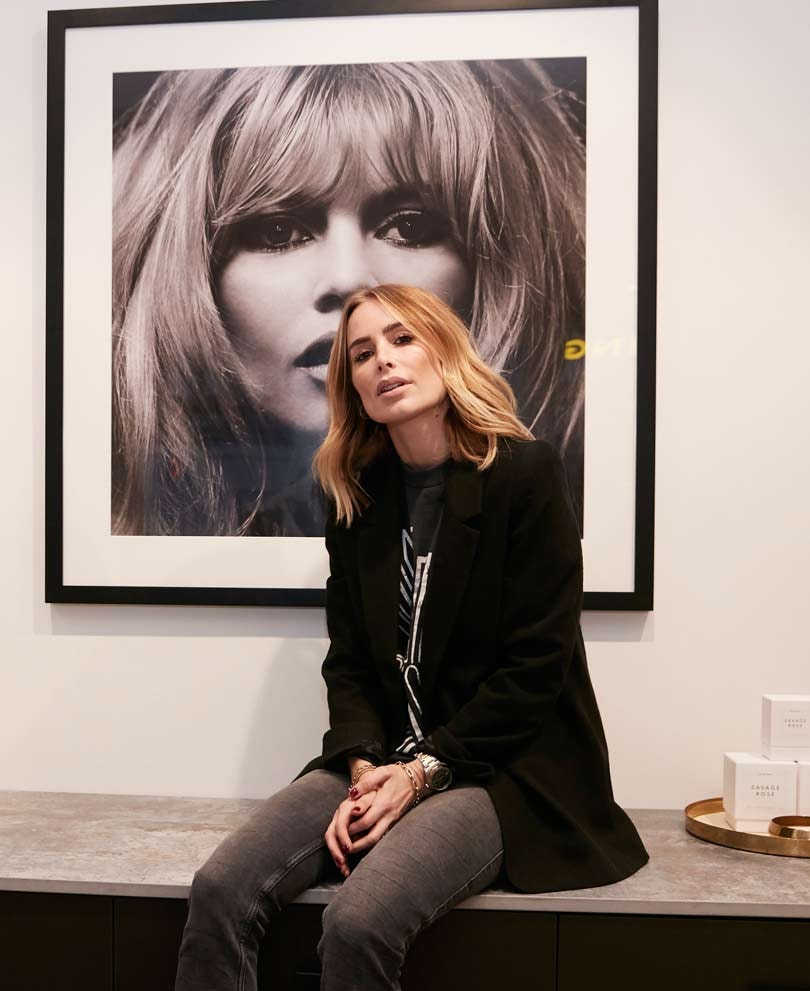 At the centre of Anine Bing’s success has been Instagram and her influencer status, as well as being an early adopter of the ‘see-now, buy-now’ model, long before Burberry and other brands started to, and now the label has monthly collections, where they release a couple of new pieces each week. These are then promoted through not only the brand’s Instagram account but also Bing’s personal one, which allows her fans to purchase immediately what she is wearing, reaching over 728,000 followers.

Bing explained: “We’ve built our brand through Instagram, we were one of the first brands to realise the power of Instagram, a lot of brands didn’t get on until a few years ago, and we were on right away when Instagram launched, we were lucky to get on early and that helped build the brand organically as we had no budget for marketing, literally just through Instagram for the first five years.

“Instagram is a great way to show how to wear the pieces.”

The concept of season-less, classic investment pieces really works with a ‘see-now, buy-now’ model, and means that Bing’s community of fans can get immediate access to the latest styles without the wait.

“I feel more and more brands are adopting this method, and it isn’t that it is fast fashion as they are investment pieces that people keep for a long time, but you don’t want to see something on a catwalk and then in six months it is finally available,” added Bing. “It is just a different way of doing it and it works really well for us as that’s how we’ve been doing it since 2012. I think that’s how the modern woman wants to shop.” 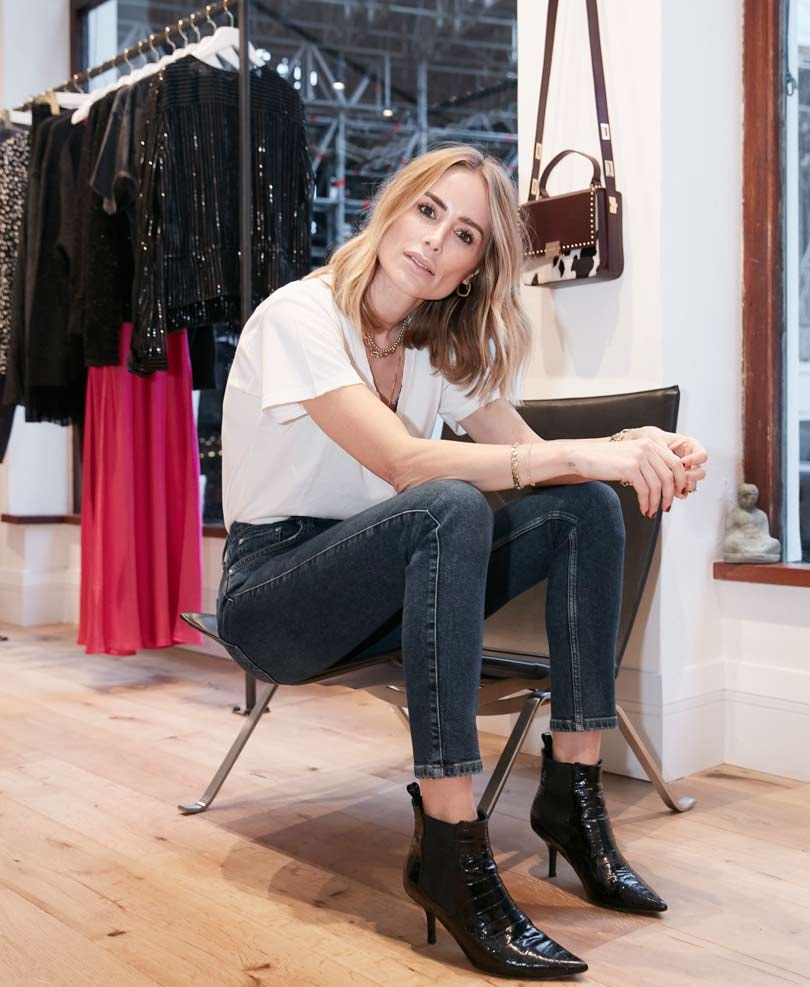 Unlike traditional models it does present challenges for the brand, as a shorter production lead time means that they are designing six months ahead but still producing a current collection each month.

Bing noted: “It’s a gamble, as other brands they sell their collections to wholesale, and they can kind of get an idea of what will sell, we are more like what’s our gut feeling on this piece, and sometimes it sells out within hours and other times it can last for a couple of months.

“If it does sell quickly or well, or I really love it we do reproduce it again.”

To assist with the growth in demand and expansion, the company has set itself a target of doubling its business in 2019 through 2020, and has tripled its employee base to a team of 60 in the past two years, including added key hires including appointing Annika Meller as chief operating officer, Paul Courell as chief financial officer and Jacob Rokeach as vice president of e-commerce and growth.

Anine Bing reports that it has doubled revenue year-on-year and has seen notably new customer growth of 50 percent in June 2018, and that’s only going to keep growing with funding from key investors, who have previously invested in companies including Farfetch, Glossier, Goop, and Trunk Club.

The womenswear brand has states that it will use the latest injection of capital to fund its continued retail expansion, digital growth, technology and analytics to drive consumer insights and decision making, and personnel.

Commenting on her investors, Bing said: “They are just super supportive, they’ve been amazing, and it helps us to open so many more stores. We are really much on the same page, we want to go in the same direction, I’m very lucky.” 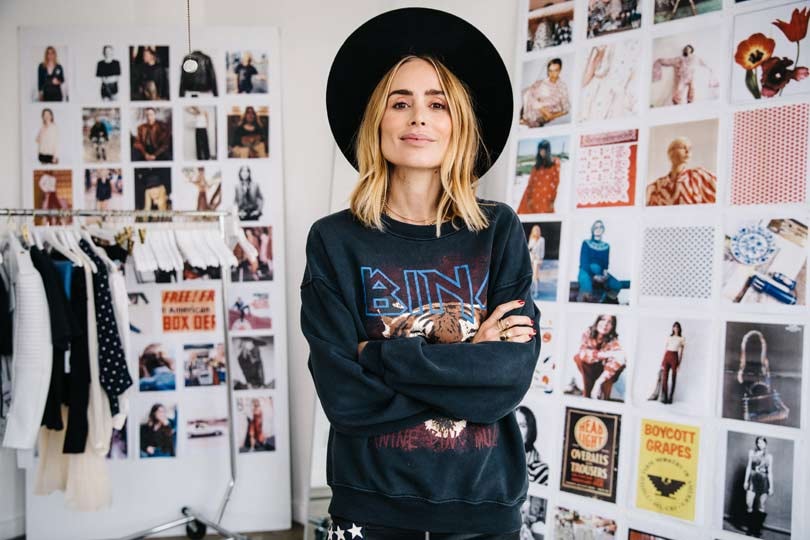 If 2018 was anything to go by, from opening new stores in New York, Los Angeles, and London, as well as adding a capsule unisex kidswear collection, Bing Kids for ages 2 through 10, and collaborating with Scandinavian brand Gina Tricot, H&M’s local competitor, on a more affordable collection and with Janessa Leone on a collection of hats, things are looking bright for 2019.

“We’re excited for 2019, we are looking at adding other categories, I can’t you exactly what is going to be next, but my main focus is to just expand the team and get even better in each area, and adding the stores is going to take some time.”

New categories on the horizon, to add to her jeans, tailoring, basics, knitwear, lingerie, footwear, jewellery, handbags, and childrenswear, could be extending its lifestyle brand, which currently includes a gorgeous smelling candle ‘Savage Rose’ which is the scent of her London store, it is however, just about “finding the time and the right team,” added Bing.

The influencer-turned-designer also didn’t rule out more collaborations, stating that working with Gina Tricot was a “great experience” that she would repeat, the only criteria would be that the brand is a natural “organic fit,” adding “everything we do is very organic and authentic to who I am.”