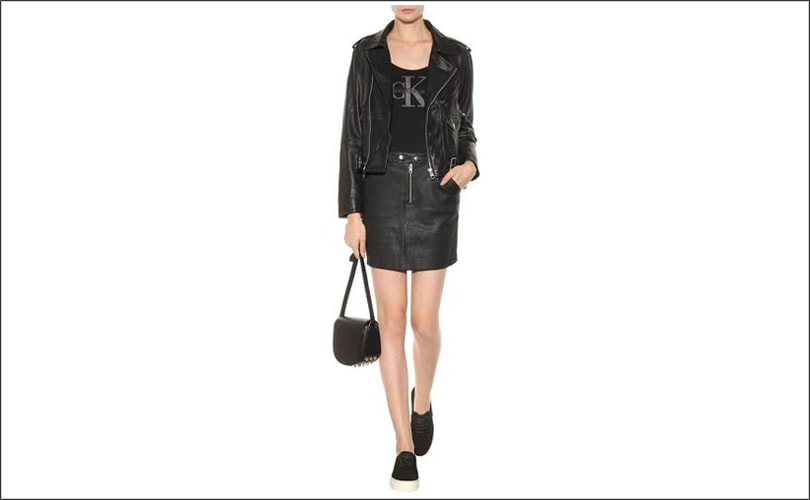 Calvin Klein and Mytheresa.com team up for capsule collection

While it might sound like something completely brand new, it's actually just an update of Calvin Klein's classic, all-black moto-style pieces. The inspiration for many of the designs can be traced back to the 1991 Calvin Klein Jeans advertising campaign featuring Carre Otis.

Pieces in the line include moto jackets, t- shirts, leggings, shorts, a bodysuit, a minidress, a miniskirt, boots, and a bucket bag. Price points for the collection range from 88 dollars for a bodysuit to 798 dollars for the "Re-issue" biker jacket.

The collection launched on Mytheresa.com this week, and it will also be available at Calvin Klein stores and on calvinklein.com.

Calvin Klein Jeans typically has mid-range stores like Macy's as their retail partners, but they have been doing a series of more high-end capsule collections over the past few years. In addition to their collaborations with Mytheresa.com, there has also been the Calvin Klein #mycalvins Denim Series done with Opening Ceremony which Kendall Jenner was featured in.

Calvin Klein has been making headlines lately, particularly surrounding their campaign stars. For fall 2016, they have enlisted Grace Coddington, Frank Ocean, Margot Robbie, Henry Rollins, Cameron Dallas, and James Rodriguez just to name a few. Rapper Young Thug is also featured in the campaign, and he sparked a bit of controversy by modeling pieces from the brand's women's line.