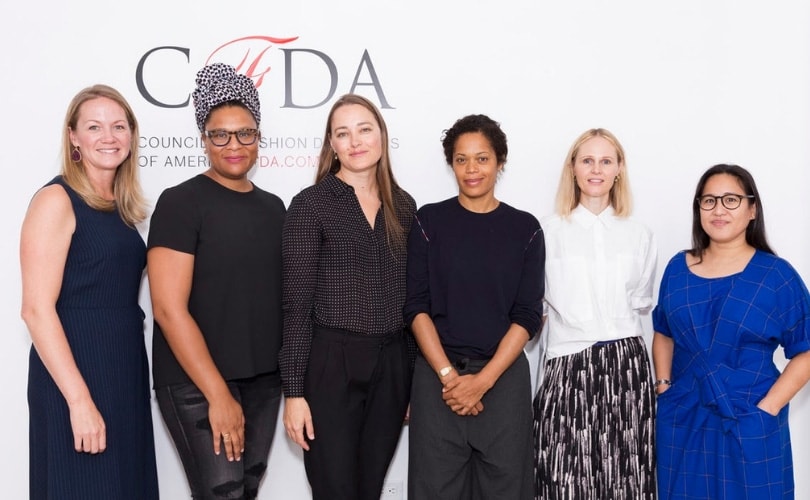 Career Goals, Mentorship, And Transparency in Focus at Women in Fashion Conversation

Gender equality in fashion is important to the CFDA, and a goal we work towards. Witness, for example, The Glass Runway survey developed with Glamour magazine earlier this year that kicked these efforts into high gear.

The importance of building strong relationships from early on, the value of mentorship and training, and retaining top talent were among the key topics that were tackled by this group.

Naugle kicked off the conversation by asking the panelists about their career goals when entering the industry and how that changed.

She added that in the mid-1990s – pre-Google and The Devil Wears Prada – information about fashion careers was less easily available.

“For a lot of women, it meant researching mastheads,” she recalled. “I remember thinking, ‘I wonder what Liz Tilberis looks like.’ None of it was easy. You really had to be very resourceful to finding a job. It is important to really telegraph your interests. And to find mentors is important, and that you are consistent and confident.

“You have to figure out what your identity at work should be, and to really leverage your network,” she added. “Where is the market going? What are the opportunities? The way to grow professionally is to grow intellectually.”

Developing and maintaining professional relationships is key, according to Colovos. “Having experience helps you change and maneuver,” she said. “Fashion is a tough business and it is changing, quickly and fundamentally, and it all goes back to the product. You go back to the idea of what people want. Stay true to yourself and you keep building on layers.”

An unexpected layoff can be a challenge and an opportunity at once. Hurt remembered a female friend’s reaction after exiting a magazine job. Instead of sulking and looking for other jobs in a field that wasn’t hiring, the next day, she put a new idea to plan and launched a successful business.

“Do something. Freelance; work anywhere; don’t worry about what it looks like, because it will lead to something else,” she said.

Dizon started her company to have more flexibility. “I did it with the mindset that I wanted to create the kind of company that I would want to stay at,…where, if you know you’re getting your work done, you can leave early.”

Women often don’t get the level of mentorship that men do.

“I have been lucky I worked for very strong women,” said Wilson, who worked at Real Simple and Huffington Post before joining Essence. She recalled the women who mentored her and made sure she progressed in her career.

“I have had some very high-powered successful women seeing me through,” she said. “And because of that, you can’t not want to pay forward.

“Being a brown woman in this industry, I am not an anomaly,” she added. “There are more black women that do what I do and I want to make sure they get a seat at the table.”

On mentorship, Dizon noted: “I had great fortune of my first job being hired by Lynn Tesoro as a receptionist at Calvin Klein, and within two weeks, I was promoted to the PR department . She was a wonderful mentor. She gave me tasks, and no task was beneath me. There has to be a sense of ownership of getting the job done, and I always pushed it a little bit further. To be a good mentee is to take every little task and make something more out of it.”

Ultimately, a good work environment is when people take a genuine interest in their colleagues’ lives

“We found that the more communication we have and the more we share things, the smoother things go,” Dizon said. “We have systems for keeping each other informed but there is nothing better than meeting face to face.”