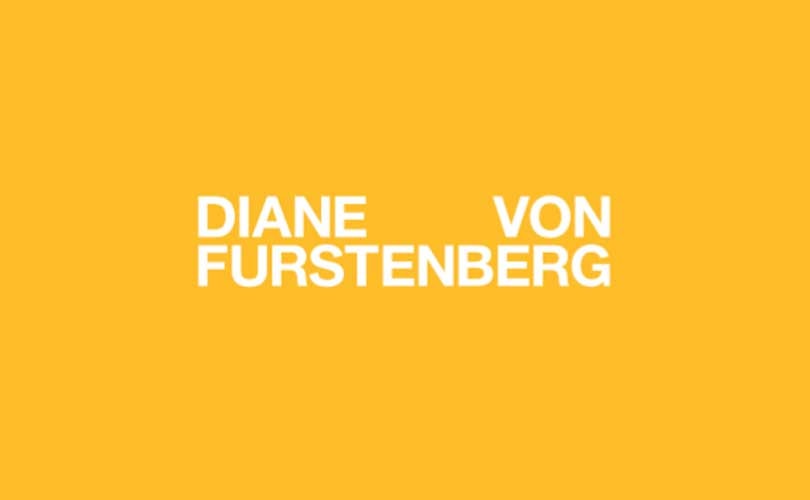 Released to coincide with the first drop of spring/summer 2017 and ahead of the autumn/winter 2017 presentations, Diane von Furstenberg has had a facelift, which features a simple sans-serif typeface, canary yellow colour scheme, and a new monogram inspired by an archival DVF brand mark from the 1970s.

“I’m very excited to finally share with consumers my vision for DVF,” said Jonathan Saunders. “We have taken the brand’s core values and energised them for our modern woman.”

Saunders has collaborated with creative director Jonny Lu to produce the new brand logo that the designer label describes as a “bold, timeless and modern identity” that it believes is “accessible and inviting” to a new DVF audience. The custom typography was designed to complement the brand’s pattern, print and changing colourways from season to season.

The new logo, which has a wide separation between “Diane” and “von” and then on a second line has “Furstenberg,” will be used across all brand elements, including hangtags, woven tags, packaging, and DVF.com.

Introducing the logo for the new Diane von Furstenberg. Visit our new website at DVF.com.

Saunders also collaborated with Lu on a new monogram inspired by an archival DVF brand mark designed by Italian architect Massimo Vignelli in the Seventies. The new monogram references geometric forms used by design schools such as the Bauhaus in a modern and contemporary way, while its rounded edges have soft lines that are feminine and sensual. The monogram will appear across architecture, product and other categories in the future, said the brand.

The designer label is using its spring 2017 ad campaign to communicate its rebrand. Instead of using products from the new collection, the campaign will feature the new logo at the centre of the new brand colours, which will be forms of primary colours, red, yellow and blue.

DVF said that the campaign will “speak more widely to the brand itself by strategically placing the new logo at the centre and communicating a colourful, optimistic and inclusive message”. The new rebranding will run in niche international fashion publications, across digital platforms, wild postings and out-of-home.

Saunders joined Diane von Furstenberg in May 2016, following the closure of his eponymous label at the end of 2015, and he was given responsibility for the overall creative direction of the brand, as well as tasked with evolving the identity of DVF. His first collection for the label was for spring/summer 2017 where he showcased playful, pattern-heavy pieces to wide acclaim.

Introducing the new logo for the new Diane von Furstenberg. Visit our new website at DVF.com.