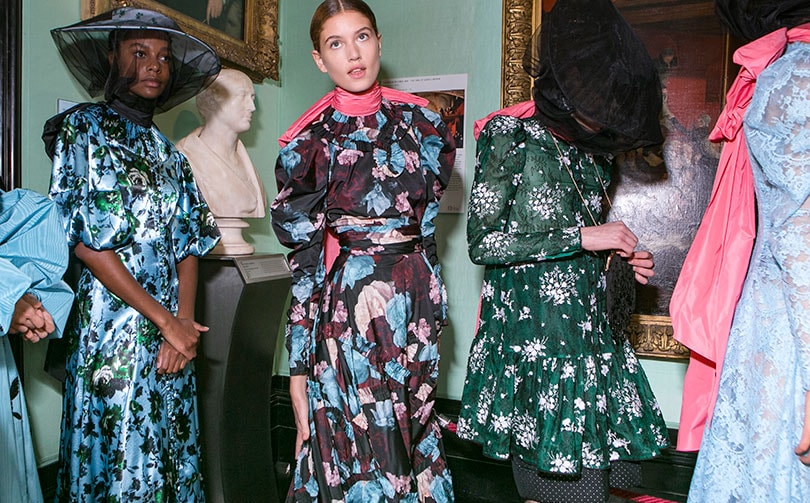 Does a digital London Fashion Week have commercial viability?

In another film, Canadian designer Erdem exhibited a poetic and romantic setting for his AW20 pre collection. To a soundtrack of Paul Mottram’s Valse Triste, models moving in slowmotion wore billowing gowns and pretty florals. Roaming dreamily across a traditional film set, the images are interspersed with stills of flowers and collection close-ups. Erdem’s LFW video, while not directly shoppable, had the collection for sale on the brand’s website.

Menswear designer Daniel Fletcher, in a conversation with Miss Vogue on Instagram, said the brand was moving to a See Now Buy Now model, after re-evaluating how it was operating and wanting to narrow the gap between the audience seeing a collection and being able to buy it. The collection was not shoppable via Instagram.

On its website, London Fashion Week designers each have with their own dedicated brand page, subdivided into content and industry, with the latter offering downloadable look books, requests for line sheets or links to showrooms. For buyers, some but not all brand pages contain sales information as not all designers are wholesaling a collection in June. Shopping the content on the LFW platform isn’t yet possible, but there are plenty of links to designer’s own websites and stores. As to forward ordering, wholesale or retail linkups, these are not integrated features and up to each brand to communicate.

A re-set of fashion week

While fashion week remains virtual, the industry is not so much resetting as it is responding to how it it can best present the new season without taking a leave of absence or incurring greater losses. Both the BFC and CFDA call for a system change, encouraging brands, designers and retailers to slow down, produce less merchandise and be strategic about how and when they intend to sell products. Both call for action on a grand scale, but for struggling designers fighting for survival, there is a tangible need for support in resources, not manifestos.

Despite being gender neutral, this outing of LFW fell during the traditional menswear and pre-collections calendar, which is one of the reasons to explain the absence of bigger brands like Burberry.

Mostly, however, the digital formula for presenting fashion needs to be reworked to create the same buzz captured by fashion shows. Despite the ingenuity of filmmakers, the theatrics and atmosphere of a catwalk presentation is difficult to emulate into a video short. Even if LFW’s digital collections reach a wider audience, the question of commercial viability remains to be seen. The visual and flamboyant pull of emerging designers that London is proud to showcase each season is only one facet of British fashion. The UK has a world leading luxury and retail sector that is by far the backbone of the industry, despite the devastating impact of Covid-19.

Fashion weeks must continue, if not offline than online, but the buzz must be measurable by more than click-throughs, likes and views. Emerging designers need a foothold and real support from buyers and retailers. Established brands need backing in a most annus horribilis to stay in business, sell their collections and have resources left for development. Not to mention the financial investment required to create the content and assets needed for digital fashion week. While there will be plenty of buyers and retailers on the LFW radar, there is no guarantee of intent to purchase.

Want to become a member of FashionUnited's B2B Marketplace? Buyers and brands can register via fashionunited.com/marketplace.