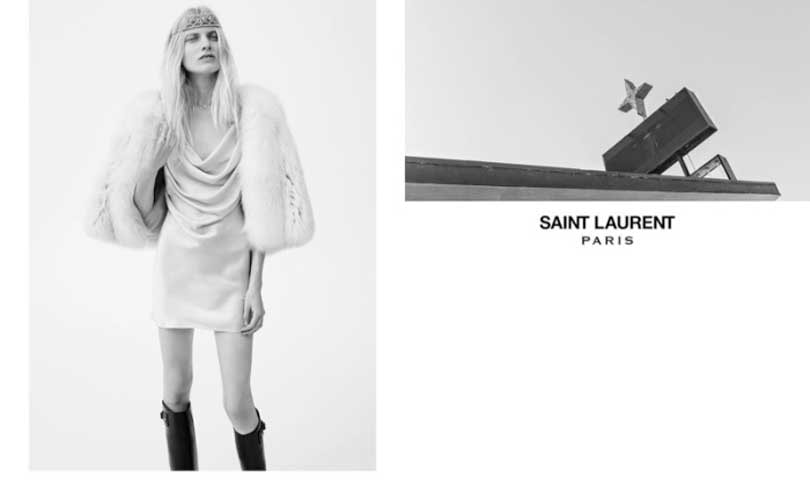 Hedi Slimane: Will he stay or will he go?

London - As all fashion eyes will be on the house of Saint Laurent this Paris Fashion Week, an apt soundtrack for its AW16 catwalk show could be that infamous song by the Clash, "Should I stay or should I go."

Saint Laurent's creative director Hedi Slimane has been plagued for weeks of a potential departure, however spokespersons for both the company and designer have remained silent, confirming neither a departure or that it doesn't respond to rumours.

Slimane's first collection for the House was Spring/Summer 2013, however his contract with Kering, which owns Saint Laurent, is due for renewal by the end of March, and rumors persist that the designer and the company have been unable to agree on new terms.

Anthony Vaccarello, a Belgian designer, has been named as a possible successor, however, he stated "it’s a rumor,” after his own show on Tuesday. Nevertheless, reported the New York Times, his show was busier than usual, with a buzz some attendees attributed to Mr. Vaccarello’s potential new prospect.

There is no denying Hedi Sliman's impact on YSL has been hugely commercially successful, if not somewhat controversial. From the initial re-naming of the House, the re-branding, and its mystifying public relations strategy, Mr. Slimane’s Saint Laurent is not solely about clothes for clothes’ sake. It is just as much the shows he stages, the music he commissions to score them, the advertisements he shoots himself, the stores he redesigns. All in all it is a holistic view of a label that he controls almost entirely. He has not merely designed a collection; he has reshaped the entire brand.

In terms of numbers, Saint Laurent is one of Kering's most important labels, with just under 1 billion euros in revenue in 2015, up nearly 38 percent over 2014. In 2011, the year before Mr. Slimane’s appointment in March 2012, the company reported 354 million euros. Not bad for a creative director who once banned the New York Times critic from attending his shows.

As fashion critic Alexander Fury once stated: "It doesn’t matter if we (journalists) like it (the collection) or not.” The brand will succeed without critics' reviews. While the name Yves Saint Laurent certainly has meaning through its legacy and is part of a wider fashion dialogue, the new Saint Laurent continues to ruffle feathers as much as it continues to impress commercially. The interesting question is, how would the new YSL fare without Mr Slimane?