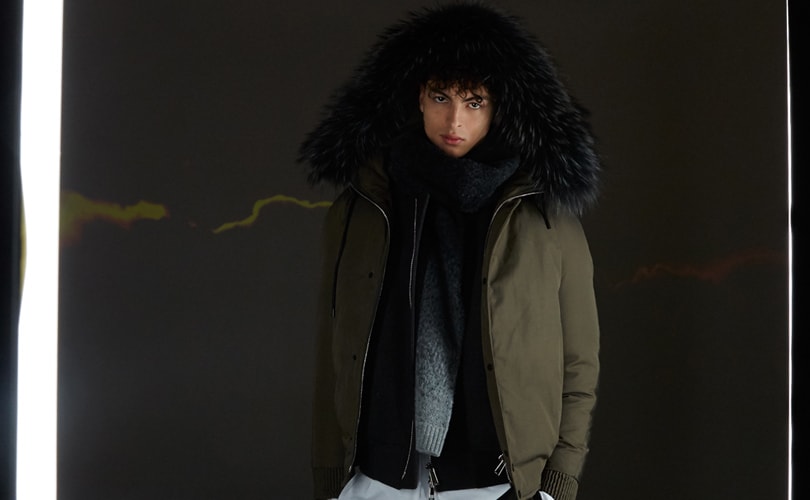 New York - Last season, at the first ever NYFW: Men's, it was clear that men's wear was falling into two camps, either athleisure or vintage glamour. It looks like the trend in men's wear is continuing with New York Men's Day showcasing the diversity of brands who still fall into either one of these two camps.

To begin with, their was Krammer and Stoudt whose offerings gravitated between the traditional stylish gentleman and the casual cool guy. There were tailored suits, bomber jackets, and striped t-shirts. The brand proved that high-fashion doesn't always have to be either or when it comes the picking between casual and formal, and a combination of the two can make for a great ensemble.

Max 'n Chester also emphasized this point as they paired blazers and suiting pants with offerings like casual t-shirts and sweaters and snow caps. The looks were very contemporary New York street style, and seemed like something right off the go-to selections rack for many of the attendees at New York Fashion Week: Men's.

On the other hand, PLAC was all about the athleisure offerings and neutral colors with a strong focus on black and white. Neutrals are always a safe bet for men's wear, as men tend to be more reserved about their fashion choices (although that is slowly changing with more patterns popping up.) The brand's offerings for this season included white and black jackets, black joggers, and neutral colored hoodies.

They are one of the many examples of how men's fashion has adopted a more urban aesthetic thanks to the athleisure trend. Garciavelez also falls into this camp of designers who have turned toward a more relaxed look. The label's inspiration for the collection came from a thermal spa holiday, and this season they were all about the loose layered silhouettes. Loose fitting clothes don't need to be tacky, as they proved with offerings like a camel coat with rounded shoulders, baggy trousers, and wide cut t-shirts.

Then there was the creme de la creme of vintage glamour, David Hart. For his collection, the designer took it all the way back to the jazz era and used all Black models for a collection that seemed straight out of the Harlem Renaissance. Offerings included plaid blazers, tuxedos and suits made from coated fabrics, and leather and suede bombers.

The outlier from all the usual trends of men's wear would be Edmund Ooi. The designer, who had a very avant-garde collection last season, scaled back his usual aesthetic for his fall/winter 2016 collection. This season, he gave us cropped sweaters, leather moto jackets, and a polyester trenchcoat. While the designer might be trending towards more functional offerings, he always has the elastic waistbands as part of his signature construction in his garments.

New York Men's Day proved that men's fashion continues to be an ever changing landscape, and there is room for every look from the casual to the formal. This is just the beginning to what's to come for New York Fashion Week: Men's.