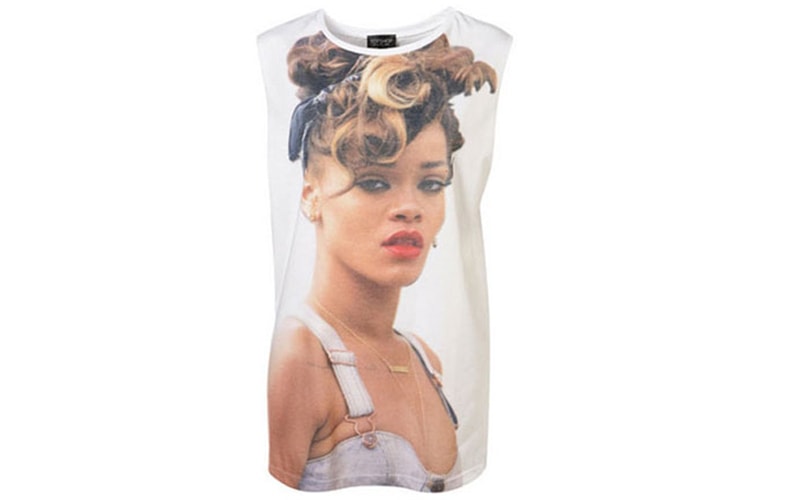 The Court of Appeal has upheld the legal claim filed by artist Rihanna against Topshop owner Arcadia Group, after the group requested to overturn the previous ruling in which the highstreet retailer was ordered to pay her 200,000 pounds in damages for using an unauthorised image of her on a T-shirt, without her permission.

The UK Court has banned Topshop from selling the infamous T-shirts, which featured an image of Rihanna taken in 2013, but the fashion retailer appealed the injunction granted in Rihanna’s favour. The original ruling, which has been handed down by High Court Judge, Justice Birss’s stated that Topshop had fallen foul of “passing off” laws, and by selling the t-shirt the high street retailer deceived customers into thinking that the artists endorsed the garment, or that it had authorisation to copy her likeness, which it did not. In fact, at the time Rihanna had recently signed an exclusive agreement to design clothes for rival retailer, River Island and had no personal connection to Topshop.

“Celebrity culture is so all-pervasive now. This judgment affirms the principle that use of a celebrity’s image on a product could mislead the public into believing that it is officially endorsed by that person,” commented Arty Rajendra, Partner at IP law firm Rouse Legal. “It’s a natural update of the law of passing off in the modern world - celebrity merchandising rights are extremely valuable, and huge investment is often made into cultivating and sustaining a particular image. It’s right that unlicensed manufacturers should not be able to take advantage of that investment and that customers are not deceived into thinking they are buying ‘authorised’ products.”

Ben Mooneapillay, Partner and trade mark attorney at JA Kemp, specialising in the fashion sector added: “This judgment does not mean that from now on all merchandise bearing images of celebrities must have been approved by the celebrities concerned. This case rests on a very specific set of facts. Generally speaking, retailers can continue to sell goods bearing celebrity images provided they have obtained permission from the person who owns the copyright in the image. This particular image resonated with fans more than other images of Rihanna as it was taken from a controversial music video shoot. Rihanna’s previous association with Topshop also meant that consumers may have more reason to believe that she was endorsing the product. It was these facts that made Topshop's sale of the product illegal.”

“We may now see an increase in the number of celebrities challenging the use of their image if they have previously been associated with the seller of the merchandise. This is only likely to apply to large retailers who can afford these celebrity associations, not market stall holders.”

If Topshop wishes to appeal again, Arcadia Group will have to seek permission from the Supreme Court, not an easy task.