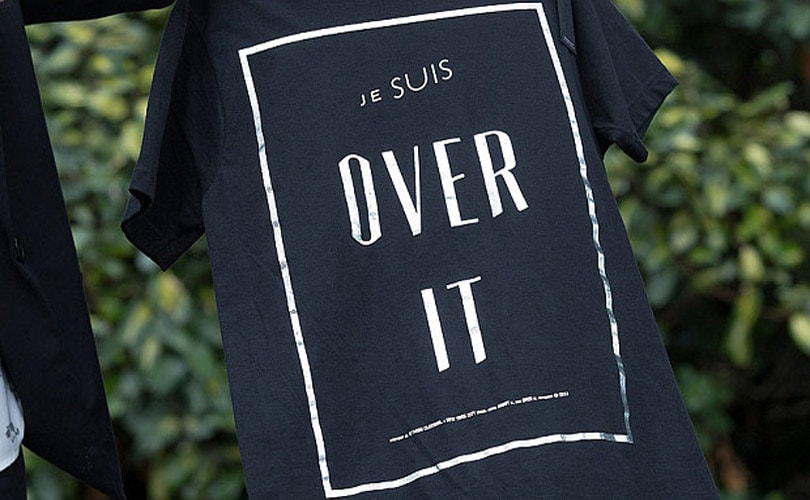 London - Outlet clothing retailer TK Maxx and online fashion giant Asos have both pulled an offensive t-shirt from sale with carried the slogan “Je suis over it”, which is said to be a mocking reference to the Charlie Hedbo massacre that occurred in Paris earlier this year.

Although the t-shirt is understood to have first been launched over 10 months ago by Reason Clothing, a New York-based lifestyle brand,TK Maxx has decided to withdrawn the t-shirts from sale in 280 stores following a customer compliant made by Tom Young. Asos, which was offering the black t-shirt at a discount price, has also removed the t-shirt from its online offering.

Young, who first spotted the t-shirt for sale in a TK Maxx branch in Bristol, argues that the t-shirts slogan was in bad taste as it could be seen in reference to “Je suis Charlie” phrase which was adopted as a sign of free speech and solidarity to those attacked in the terrorist attack. Twelve people, including eight journalists, were killed when gunmen stormed the office of the satirical magazine in January.

“It’s appalling that a global brand has allowed a t-shirt like to be produced and sold in store,” said Young to the Mirror. “Even if the message did not intend to cause upset in relation to the tragic event, I am adamant it should be taken down from stores immediately.”

A spokesperson for Reason said that the label was working with retailers to remove the t-shirt in question from sale and have them destroyed. A spokesperson from TK Maxx added: “We take product matters very seriously and appreciate that this T-shirt has been brought to our attention."

“As soon as we became aware of the offensive T-shirt message, we initiated the process to remove this item from our stores and are internally reviewing how we inadvertently purchased the item. We would like to apologise to our customers for any concern this may have caused.” A spokesperson from Asos has also issued an apology in light of the situation and support the brand's cause to destroy remaining stock.