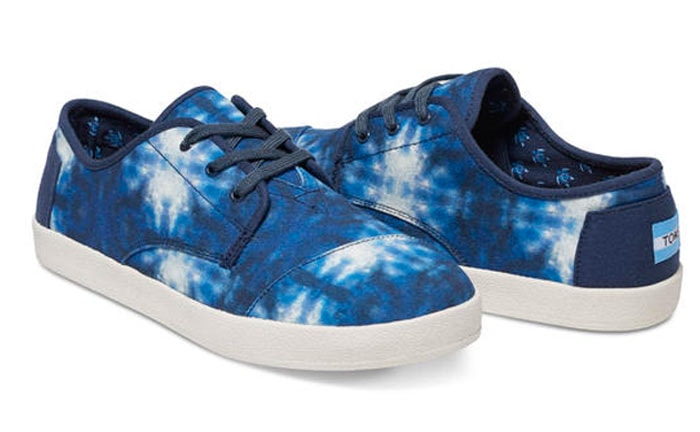 Toms x Oceana's limited edition footwear collection launched several weeks ago, with more than perfect timing. Today, April 22, marks Earth Day, a day igniting people to get involved and bring a call to action to environmental issues. Toms x Oceana collection is inspired by the sea, with all proceeds going directly towards Oceana, an organization whose campaign mission is to protect and restore the world's oceans.

Sea turtles face constant threats from human activities, and this unique collection aims to help raise awareness about their ecological importance in addition to Oceana's mission as an organization. Toms is no stranger to philanthropic work, being best known for their buy-one, give-one model to provide shoes to people in need.

This collection features several styles, including both slip-ons and sneakers.

The Toms team and Toms Animal Initiative Founder Heather Mycoskie wanted to do something specifically for sea turtles because every species of sea turtle found in the U.S. is endangered. They are especially vulnerable in beach heavy areas like Florida and the Gulf of Mexico where they are often caught in fishermen's nets.

Wherever sea turtles feed, rest, and mate, they are also vulnerable to gillnets, longline hooks, and especially trawl nets that scoop up everything in their path. In 2012, the National Marine Fisheries Services estimated that up to 50,000 sea turtles could be killed annually in southeast shrimp trawls, adding up to 150 turtles captured per day.

“I’m a beach girl at heart and always have been, so when I heard about Oceana and the amazing work they do, I knew we needed to find a way to work together. I’m really proud of the collaboration and product we’ve created together,” said Mycoskie to Footwear News after the launch of the collection.

The shoes are offered in men's, women's, and kids styles. Price points range from 36 dollars to 64 dollars.