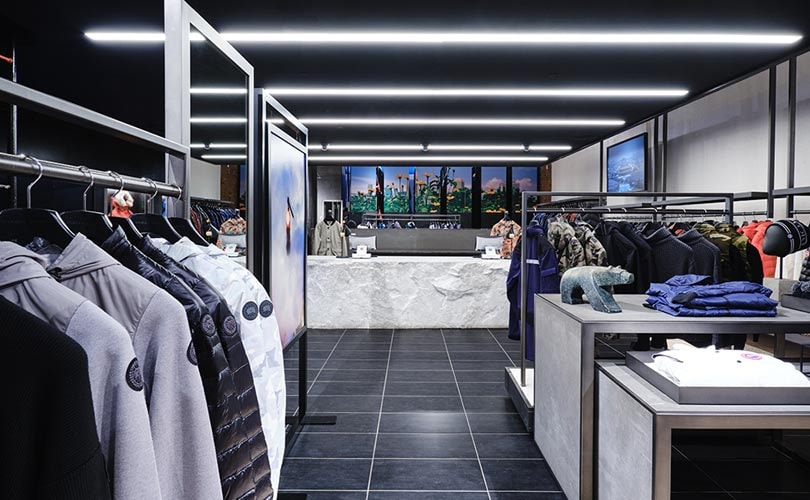 NYC-based photographers Lauren Ward and Alex Kweskin, otherwise known as Ward + Kweskin, were selected to capture the essence of Canada Goose's rainwear, windwear, and lightweight down in unpredictable weather conditions for the brand's spring/summer 2019 campaign. In honor of the campaign, Canada Goose curated an exhibition featuring the work of Ward + Kweskin and two other NYC-based photographers, Laura Fontaine and Manuel Pena, whose work explores the elements of spring. The exhibition will be open at the New York Flagship located in SoHo from March 8 - March 31.

The couple literally took it to the elements to shoot this season's campaign. Canada Goose is known for keeping photographers and film crews protected from the elements, and Ward and Kweskin experienced torrential downpours in their efforts to create the perfect shots for this campaign. "We have been Canada Goose fans for a long time and when they asked us to collaborate with them there was no hesitation whatsoever," Kweskin said. "We really showcased the versatility of the rain gear."

"It was kind of a dream job," Ward added. "We got to run around our city and take photos of each other, which was definitely new for us."

The duo moved to New York five years ago to pursue fashion photography and have shot editorials and campaigns for different brands. This project was different from many of their past projects given the amount of creative freedom Canada Goose gave them. There wasn't a typical photoshoot setup, but just the two of them photographing each other in often less than favorable weather conditions.

"There's always a sense of anxiety when you're trekking around the city against the weather with all your gear and equipment, but we were well prepared and well equipped," Ward said.

"We timed the shoot because we wanted to be out shooting when it was really raining to really showcase the attire and functionality of the rain gear," Kweskin said. "And when you're running around the city and you've got cameras it can be stressful, but with the poncho and some of the other rain gear you can just throw it over your stuff and run for the train."

Timing was everything when it came to this shoot, and the Accuweather became the couple's saving grace. They tried to time everything so that it would be shot in a few days of continuous heavy rain or wind. "The timing with watching the weather was the biggest challenge because New York weather is so unpredictable, it could be raining one minute then sunshine the next," Kweskin said. "The moment we saw we had good rain, we just went out and hit it hard.'

This immersive in-store exhibit is an extension to Canada Goose’s overall campaign; where the brand tapped artists across five cities – New York, Vancouver, London, Paris and Beijing – to show their city in spring. Armed with just a camera and the season’s collection, each photographer illustrates that staying dry, sheltered and warm enables them to focus on the task at hand, undaunted by the conditions around them. Rain or shine, Canada Goose has creatives covered.