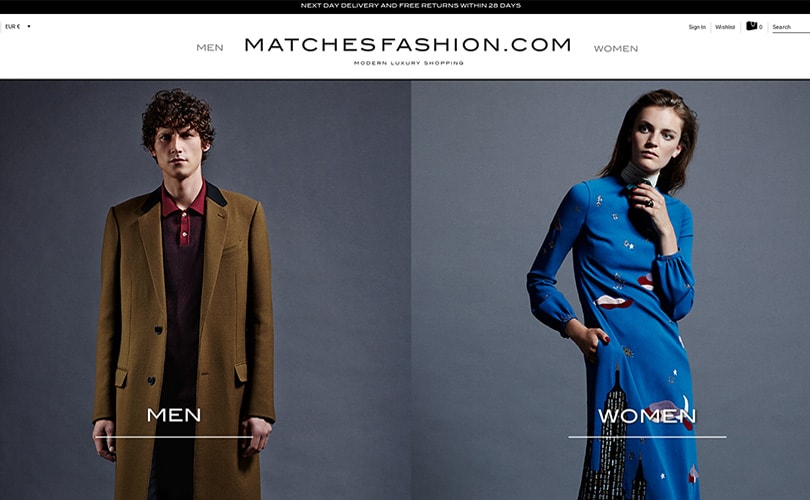 Matchesfashion.com sets its sights on 1-hour delivery and virtual reality

British luxury etailer Matchesfashion.com has its sights set on the future of retail, which will include one hour delivery as the new norm and 360-degree videos, according to its chief executive officer, Ulric Jerome.

At the moment the online retailer is working on one-hour delivery in major cities around the world as well as immervise video content, which will pave the way for virtual reality shopping. Speaking at the WWD Global Fashion Forum in Beijing, Jerome said: "I think in the next 18 months in major cities, one-hour delivery will be the norm. This is what we’re currently working on…and that will be launched soon."

However, unlike online giant Amazon, Jerome does not see the future of one hour delivery for Matchesfashion.com working hand in hand with drones straight away, due to airspace regulations. "The drone, while I completely understand and it’s an amazing opportunity, it’s certainly not going to happen tomorrow in more of a mainstream way so it’s not necessarily going to touch the mass," he added.

Since his appointment as CEO at Matchesfashion.com last year, Jerome has been working tirelessly with his team to ensure the retailer continues to win over customer loyalty. During his talk, he revealed that Matchesfashion.com average shopper makes a purchase four times a year, and has a lifetime value of close to 2,000 pounds. However, its top 10 percent of its most acitve customers have 90 percent retention rate, while the overall average is 65 percent.

As luxury shoppers are said to be "the most connected customer in the world," Jerome is working on another initiative to help Matchesfashion.com with customer engagement - stylized shoppable fashion videos. These videos will act as the stepping stones towards 360 degree videos, which will give customers the freedom to interact with the 420 brands the online retailer offers and later virtual reality.

"We are working to give the customer the best experience so that they can find the physicality they find in stores, digitally...We first start with 360 and then go into virtual reality." Matchesfashion.com would not be the first online retailer dabbling in virutal reality, as Chinese e-commerce giant Alibaba is currently working on developing VR shopping and payment systems.