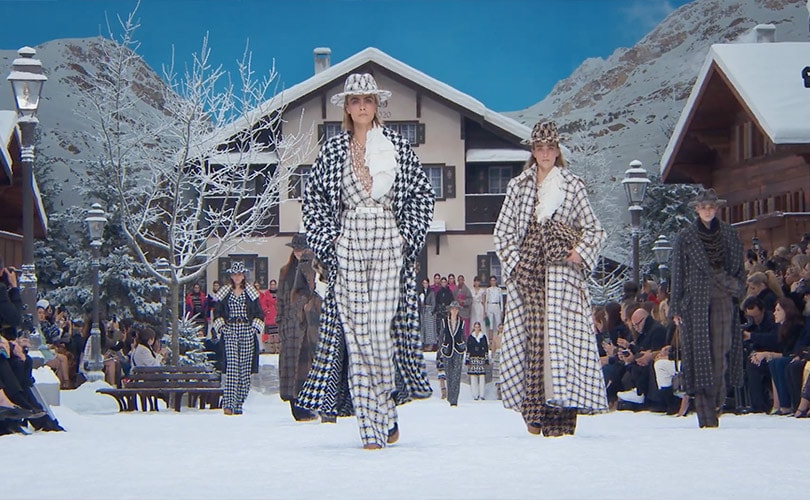 Paris - The shows must go on, was the rhetoric in Paris for its latest fashion week, as the 'gilets jaunes' cordoned off France's capital streets every weekend, making it challenging for retailers, shoppers and brands to get around.

There was vandalism at some luxury stores in the vicinity of the heavily-armed Champs-Élysées, and financial setbacks for retailers including the Grands Magasins of Boulevard Haussmann who suffered a loss of sales at the height of the protest. But while some tourists may have forfeited their tickets to visit, for the Fédération de la Haute Couture et de la Mode, it was business as usual.

Emotions ran high, especially at the idyllic alpine haven Karl Lagerfeld created for Chanel, his last collection meticulously planned prior to his death a fortnight ago. Models gathered around the Chanel Gardenia, a snow-covered chalet that saw the Grand Palais transformed into a winter wonderland in mountainous territory. After a minute's silence to remember the great Karl, Cara Delivigne trod the snow donning the season's widelegged tailoring, hand in pocket and wrapped in an ankle length houndstooth coat.

In the pure snow the models walked, serene and respectful, showing the world the talent and gifts Lagerfeld and Chanel have given the world from the variance of a tweed jacket to a puff dress as delicate as a snowflake.

Paris fashion week closed the monthlong catwalk season giving us classic chic, seventies-inspired considerations without the clichés of a bygone disco era. It was visible at Isabel Marant and Chloe, in the exaggerated shoulder at Givenchy under Clare Weight Keller, and in Balenciaga's double breasted blazer dresses, floor length coats and jumpsuits. All of which could have adorned a Grace Jones album cover circa 1979-1981.

But it was Hedi Slimane who cemented the mood, offering a bourgeois version of a new era Celine, replete with culottes, wedge boots and a palette of browns and beiges. The easy way to adopt the new seventies is by breaking down the elements, starting with a good denim jean, slouchy high-heeled boots and on top a silk blouse and scarf. Add a tweed jacket, aviator bomber or fluid coat - the more luxurious the fabric the better - and voila, the essence of the season is culminated in a practical wardrobe perfect for meandering the sixth and seventh arrondissements in Paris. Or anywhere else for that matter.