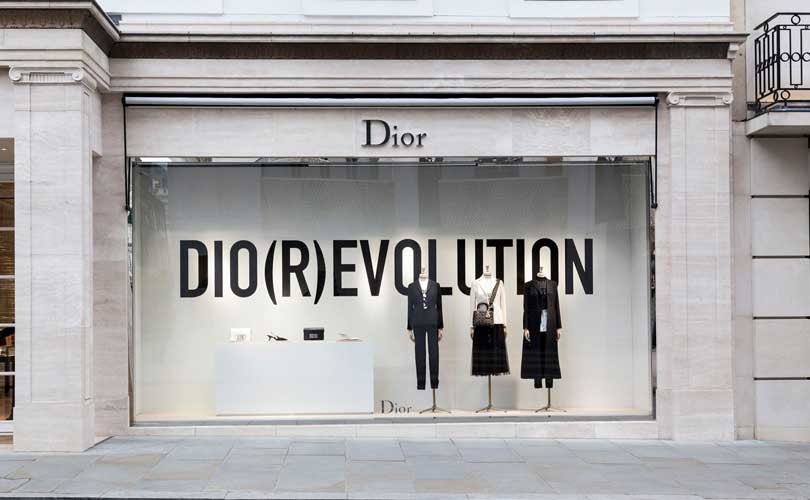 Mixing fashion and politics: Is it a good idea?

Anyone following the recent fashion weeks will have noticed that the boundary between fashion and politics has become exceedingly blurred. This was particularly apparent during New York Fashion Week, which was rife with political statements. From the bright pink Planned Parenthood pins taking pride of place on the lapels of more than 40 designers, to the t-shirts with slogans like We are all human beings; designers boldly flaunted their political ideology. It certainly isn’t the first time that fashion designers have spoken out about political issues, but what is so remarkable now is the large number of designers who are choosing to do so. However, is the ‘marriage’ between fashion and politics really such a good idea?

Opinion within the industry about mixing fashion and politics is divided. Although some designers use their shows and fame to make a political statement, others choose to keep their political opinions private.

President Donald Trump’s inauguration, which took place in January of this year, is a perfect illustration of the increased political engagement within the fashion industry. Prior to the day, the one question on every fashion insider’s mind was: who is going to dress first lady Melania Trump? Many disagreed with the political ideology of compatriot Donald, and refusing to have anything to do with his wife was a way for them to oppose him. French designer Sophie Theallet wrote an open letter explaining her position: “As one who celebrates and strives for diversity, individual freedom and respect for all lifestyles, I will not participate in dressing or associating in any way with the next First Lady. The rhetoric of racism, sexism and xenophobia unleashed by her husband’s presidential campaign are incompatible with the shared values we live by.” Kenzo’s Humberto Leon, Marc Jacobs and Zac Posen were among those who sided with Theallet.

References to politics were also visible on the New York runways. Public School designers Dao-Yi Chow and Maxwell Osborne sent their models onto the catwalk sporting red caps and sweaters featuring the slogan Make America New York, referencing both Trump and the open, multicultural character of New York. Designer Christian Siriano also used his show to send a political message by featuring a black t-shirt with People are people printed on the front in white letters. Fashion label LRS made a particularly striking statement while alluding to two of Trump’s controversial plans: founder Raul Solis had white underpants imprinted with the text No ban! No wall!

Raf Simons chose a more subtle form of protest when presenting his eponymous label’s collection, which referenced Punk with its copious amounts of black, chains and graphic prints. “In the seventies, Punk was a reaction to what was happening in society,” Simons told The Washington Times. “It was about a younger generation creating its own dress code, but, above all, it was a political reaction.” The Row also chose a more subtle less is more approach. For their fall/winter collection, the fashionable twins Ashley and Mary-Kate Olsen featured bright-white, oversized shirt with words like hope and freedom embroidered in small, unobtrusive lettering. 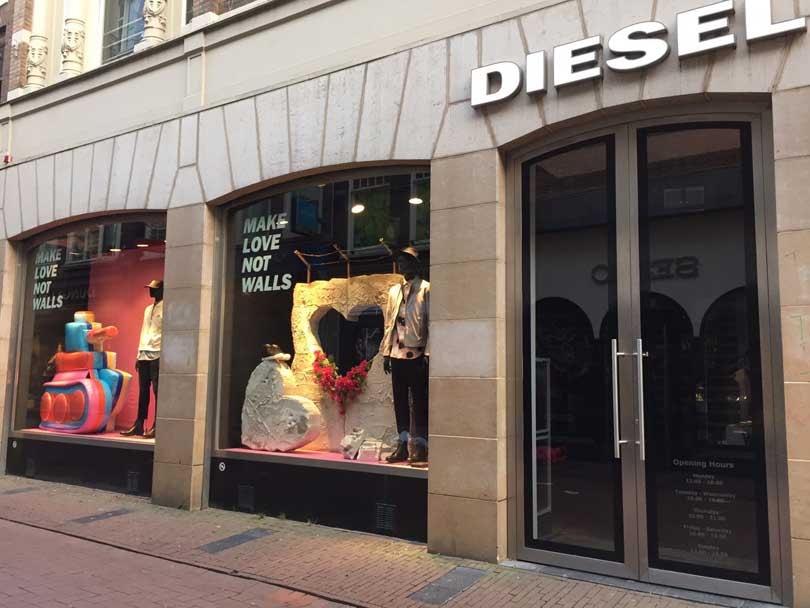 But those who think that politics has no business in fashion are wrong, as Diesel recently proved. This past Valentine’s Day, the Italian brand launched its “Make Love Not Walls” campaign. “At Diesel we have a strong position against hate and more than ever we want the world to know that, to use our voice for good, love and togetherness is crucial in creating a society we all want to live in, and the future we all deserve,” artistic director Nicola Formichetti states on the company’s website. A video, posters and photographs were made especially for the campaign, and even Diesel’s shop windows were used to spread the message. In Amsterdam, Diesel’s shop windows sport the campaign’s slogan in large, white letters, as well as prominently featuring a brightly coloured inflatable tank and a wall with a heart-shape carved out of it.

Lagerfeld: “Fashion is fashion, not politics”

The convergence of fashion and politics is not as farfetched as it may appear. Some see fashion as a form of art. Over the centuries, artists have always been inspired by what happened around them. From songs of protest to politically-inspired paintings: art was a from of self-expression and a way of communicating with society.

But nowadays, designers are not just artists; they are business people. At the end of the day, it isn’t about the political ideology of a particular designer - it’s about his bottom line. “Fashion is fashion, not politics,” Karl Lagerfeld recently told The Wall Street Journal. “Angela Merkel’s fashion sense may be awful, but after all, she doesn’t work in fashion, hmm?”. The reverse also applies: fashion designers remain designers; they aren’t activists, and they certainly aren’t politicians.

However, that doesn’t mean that fashion designers should remove themselves completely from the political arena. If making a political statement positively affects sales and the company, it might actually be advisable. Christopher Bailey, Vivienne Westwood and Christopher Kane were very vocal about their opposition to Brexit, although their concern was probably more financially than politically motivated. “All these amazing seamstresses from Italy, from all over Europe actually, who have worked for us for five years… How much would it cost us to arrange visas for all of them?” Kane, whose eponymous company is based in London, told The New York Times. In this respect, the increasing offer of muslim fashion probably also has more to do with smart market insight than with a gesture to promote inclusivity. Results from research conducted by consultancy Dinar Standard show that the market for muslim fashion was worth no less than 230 billion dollars in 2014, and will probably have grown to 327 billion dollars by 2020.

Proof that politics and fashion can mix but should not always be taken seriously was provided by the much-talked about Chanel show of fall 2015, for which - you got it - Karl Lagerfeld chose to simulate a feminist protest march. “My mother was a true feminist,” the designer told Fashionista. “I enjoy showcasing feminism in a light-hearted way, it shouldn’t be too heavy-handed or pushy.” The media raved about the collection and praised “Kaiser Karl” for the positive message his march conveyed. Fast forward to 2017 and Lagerfeld now claims that fashion and politics should neither be confused nor mixed. That show may have been a genuine expression of Lagerfeld’s feminist ideas. Then again, maybe not.