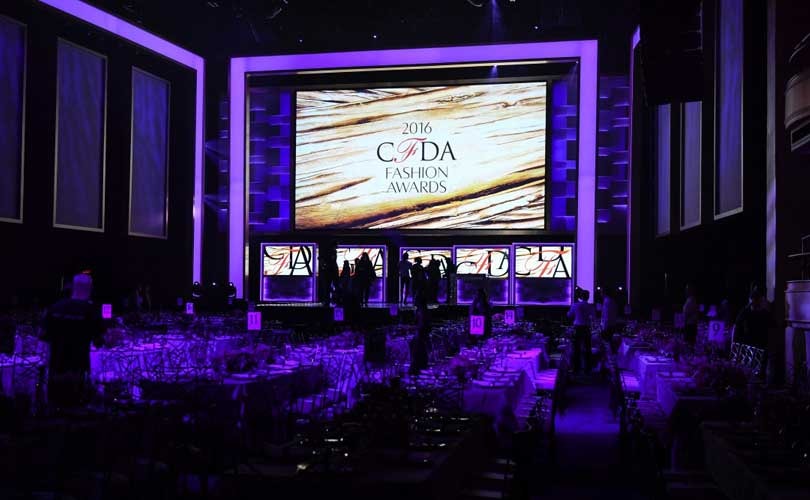 My Night at the CFDA Awards

By now you’ve ruminated over the red carpet gowns and considered the list of winners. But if you’re left wondering about the swanky event surrounding the fancy frocks and silver statue––the Trova doesn’t get the name recognition of its entertainment cousins, the Oscar, Emmy or Tony––then let me attempt to fill in the gaps.

For the first time, the ceremony, which also consists of a formal dinner, is being held in the Hammerstein ballroom on West 34th Street. The room is bathed in vivid turquoises and fuchsias that make the regularly spaced white-draped tables look like little boats on a moonlit lake. 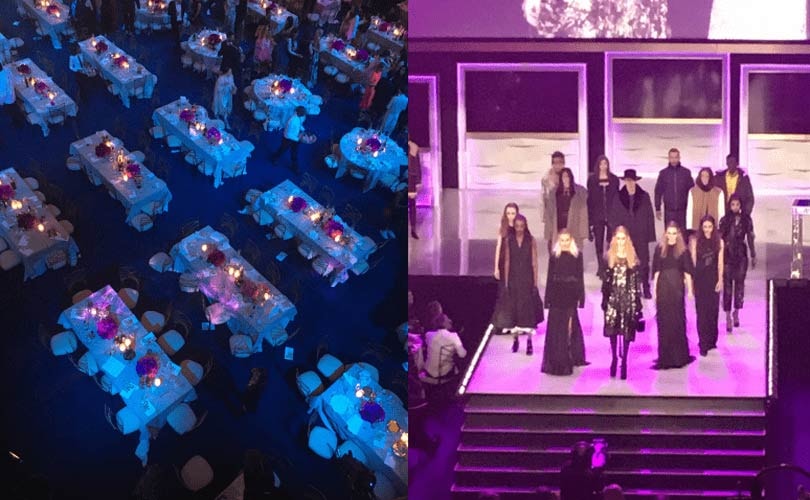 It’s my first time at the event and my presence is due to the decision by the CFDA to open up the awards (if not to television cameras, at least for this year) to the top fashion schools across the country, inviting a selection of student and faculty. After all, in the words of Steven Kolb, the CFDA’s CEO, they represent the future of our industry.

Host Joel McHale begins with a tired joke about fashion folk starving themselves––”this must be the easiest gig to cater”––followed by a dig at the inspiration for Kanye West’s recent collection––”trainyard hobos”––which is met with whooping appreciation by the student guests on Balcony 2.

It is heartening to see Thom Browne win Menswear Designer of the Year as he has always seemed to be an accepted yet somewhat sidelined figure of the New York fashion establishment. His boyfriend, Andrew Bolton, has successfully curated his first exhibition at the Met, this summer’s Manus X Machina, and stars with Anna Wintour in the film The First Monday in May which Browne dutifully plugs while onstage. Thom also thanks his hard-working team who “are waiting to do shots with me over there.”

A gold-clad Jenna Lyons from J Crew who is giraffe-tall, even in a space packed to the rafters with runway models, stalks onstage accompanied by Lena Dunham whose center of gravity is probably among the lowest of any in the room. But her sense of humour raises the laugh quotient grandly. Wearing bunny rabbit shoes with pink fluffy ears, the Girls star muses on what the CFDA actually stands for: “Committee for Doing Acid?” “Corduroy, Felt and Denim Association?” She is delighted to have “picked up a lovely Proenza bag from the coatcheck.”

Calvin Klein who, at 73, still cuts a youthful figure in his suit, introduces his longtime friend Donna Karan, for the Founders Award, saying, “We’ve gone the distance. We understand each other really well. We met decades ago. She was the most attractive, open, warm girl...” After hugging him tightly, a relaxed Karan languidly drapes herself over the podium and reminisces on the historic 70s “Battle of Versailles” in which Halston, Anne Klein (for whom she worked), Bill Blass and other American greats participated in a sort of Fashion Face-off against the French. I am left feeling that these members of the old guard are glorious examples of a career that’s almost impossible to carve out in fashion nowadays; their memories of the good old days seem to hinge on an industry that was more familial and compassionate; slower but steadily rewarding, and offering more longevity.

At a certain point in the evening, I begin to suspect that fashion designers just aren’t very interesting when put behind a podium. I don’t know what I was expecting but an award ceremony situation doesn’t reveal these dynamic creatives in their best light; many of them come across as stilted, unfunny, terse. Marc Jacobs, who wins the Designer of the Year award (again) dashes on, wearing T-shirt and jeans and, without much enthusiasm in his voice, thanks his design team and disappears again. But my disillusionment ends with the Swarovski Womenswear award: at the announcement of his name, Brandon Maxwell leaps out of his chair, struggling to insert his arms into his suit jacket and hurry onstage. Shaking with shock, nauseous with nerves, he says he had considered wearing pants with an elastic waist, but as it was a fancy dinner he didn’t want to embarrass himself, especially if the rumors that they were televising the event were true. The spontaneity of his unprepared speech interspersed with incredulous ohmygods is refreshing. Describing his younger self as “very gay in a small town,” he credits the women in his life with giving him purpose and concludes by marveling again at finding himself at such a fancy affair: “I’m a slightly overweight boy from Texas. My idea of fancy food is rolled up, deep fried and wrapped in rice paper.”

A rather odd moment occurs when Anna Wintour steps up to present the award for International Designer of the Year, but instead announces that Hillary Clinton has reached the number of delegates needed to become the Democratic presumptive nominee. Those seated in the front row tables burst into cheers but, where I am, this announcement is received with some confusion. Millennials in gowns grabbing devices, gasp, turn to each other, frowning. “Really?” asks one, skeptically, before taking to her phone to verify it. “Damnnnnnn,” drawls another.

A minor speed bump and the evening proceeds with all things fashion. Alessandro Michele of Gucci, wearing a powdery pink trouser suit with crystals trickling over one shoulder, is awarded the honor. He thanks his companion for the evening, Francois Pinault, head of Kering which owns Gucci.

Steven Kolb then extends a special word to the students in attendance before the announcements of this year’s CFDA scholarship winners are read by Heidi Klum. Onscreen, amongst the names from the top New York schools of Parsons and FIT, one of a former student of mine, just graduated from Kent State flashes: Kara Kroeger, Winner of the Kenneth Cole Accessory Design award. Her fellow Kent Staters erupt in support.

It has arrived, the point in the evening I have been eagerly awaiting: the CFDA tribute to David Bowie. Languid and striking, in her gold jacket and tuxedo pant with bold red side stripe, Tilda Swinton reads a letter to David “at the request of your beautiful missus.” After revealing that the evening coincides with David and Iman’s 24th wedding anniversary, she addresses the singer whom she calls “Dave,” and “chum”: “All your changes. Ever moving forward. All your kindness. All your magic. All your vim and vigor. All your glory. Always and always.”

She signs off with “You're our hero, forever and ever. Everyone says hi. Love, Your Tilly.” 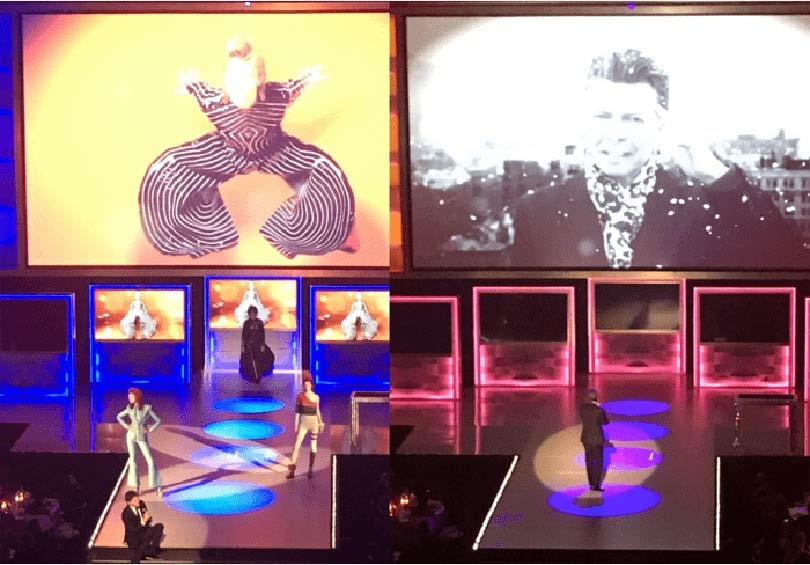 Michael C Hall, who played the lead in Bowie’s musical, Lazarus, earlier this year, sings “Changes” while models wearing a selection of Bowie’s stage costumes parade by, and the screen displays images of the singer in his many guises.

The Lifetime Achievement award is presented to Norma Kamali by Michael Kors, who shares a story from his youth about a fellow FIT fashion-obsessed student who wore a Kamali maillot to Studio 54, but unable to afford Kamali’s accompanying sleeping-bag coat, ripped the comforter off her dorm room bed and cloaked herself in that. Kamali also travels back in time in her speech, thanking the late Francesco Scavullo for putting her swimsuit on the cover of Cosmopolitan, and Christie Brinkley for wearing it so well, and Ian Schrager for asking her to design a Halloween look for Grace Jones, along with Richard Avedon and Diana Vreeland. She ends by naughtily suggesting to J Crew’s Mickey Drexler that they make a sex tape as a strategy to get her back in the limelight.

Superstar presence at the CFDA Awards

The atmosphere becomes charged as president of the CFDA, Diane Von Furstenberg, steps behind the podium, and begins speaking in a teasing voice. I notice she is tracing delicate circles on the floor with her toe. Something is about to happen. But what? Von Furstenberg remarks that designers are now celebrities and celebrities are designers. She throws in a mention of Ivy Park and everyone goes very still.

“The image of a woman in charge has never looked so glamourous or desirable,” she continues, coyly, before finally putting us out of our misery as she welcomes onstage the night’s special guest, Beyoncé. To noisy appreciation from the entire house, the singer in a sparkling gold pant suit and wide-brimmed black hat strolls on stage, in no hurry to get to the podium, allowing us to bask in her superstar presence. 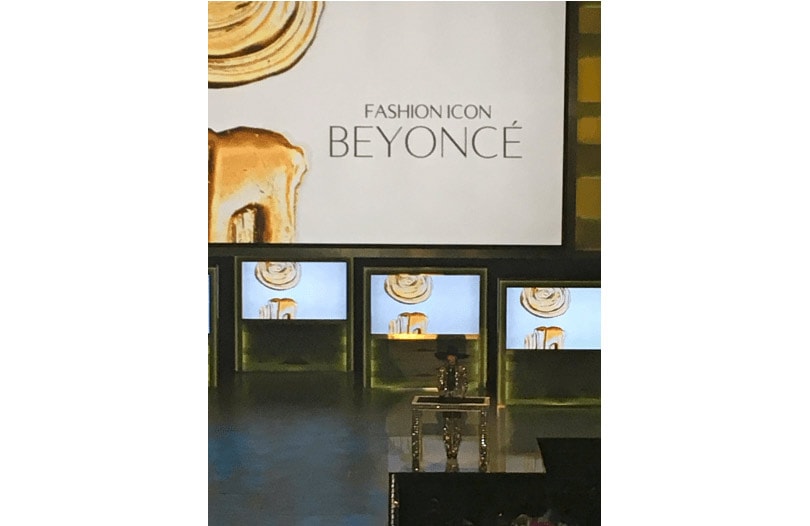 When the noise dies down, Beyonce gives a moving speech in her warm, soft, southern accent. “When we were starting out in Destiny's Child, high-end labels, they didn't really want to dress four black, country, curvy girls,” she reveals, describing how her mother, a seamstress, along with her uncle and grandmother, came to their rescue and made their stage costumes which she likened to, "an extra suit of armor. It was so much deeper than any brand name." Looking out at the audience, the evening’s recipient of the CFDA’s Icon Award, she reminds designers of their importance as “fairy godmothers, magicians, sculptors — and sometimes even our therapists." Then, she moseys off stage, shimmering and golden.

Reeling, and wondering if we should collect our purses, we notice Joel McHale is back and attempting to deflect our attention from the white piano being wheeled onstage. How can they possibly hope to top Beyonce?

With another burst of song, that’s how. The evening closes with a tribute to another of this year’s fallen style icons. Jennifer Hudson, also in gold (it seems to be the color of the night––I’m even dabbling in it myself), walks onstage, belting out “When Doves Cry” by Prince. Surrounded by twirling figures, she segues into livelier favorites, including “Let’s Go Crazy.” 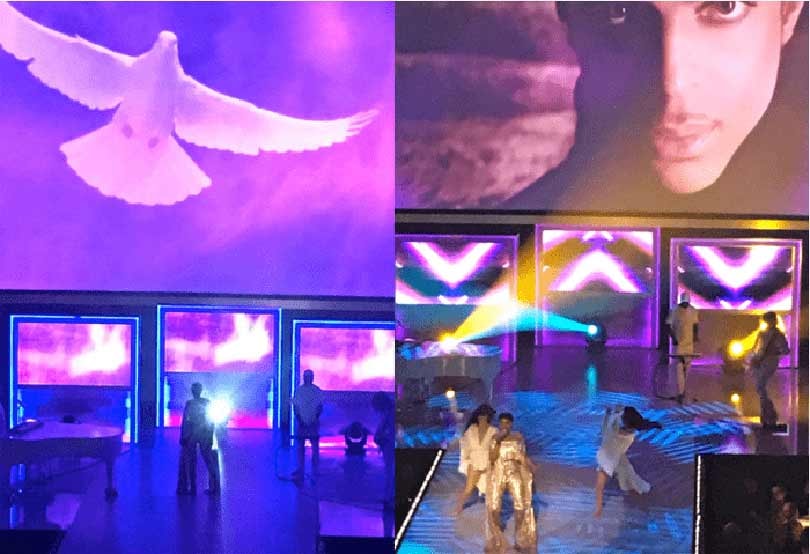 Onstage, the energy is high, but it’s jarring when I look across the room at the stiffness of the attendees. Anna Wintour remains seated, as do those by her. Others stand and gently sway, but no one joins Hudson in exhibiting the exuberance the song demands. No one’s going even a little bit crazy. An audience member dressed head to toe in purple sequins, is invited to join Hudson onstage and he gamely shimmies in honor of His Purple Highness.

The highest praise for Donna Karan and Norma Kamali

The fashion crowd give two standing ovations during the evening. One for Donna Karan, the other for Norma Kamali. Acknowledging the contributions of these two legendary females of the industry is well in order and I have absolute respect for all they have accomplished. However, I save my standing ovations for two others. Diane Von Furstenberg touched on the seductive connection between fashion and celebrity earlier when introducing Beyoncé. And Tilda Swinton, reading from her letter to David, struck a cord with the words, “These kind people, the fanciest fashion people on the planet, are giving you their highest prize.”

Who am I to argue? What is fashion without showbiz?

I’m on my feet for Beyoncé and Bowie.