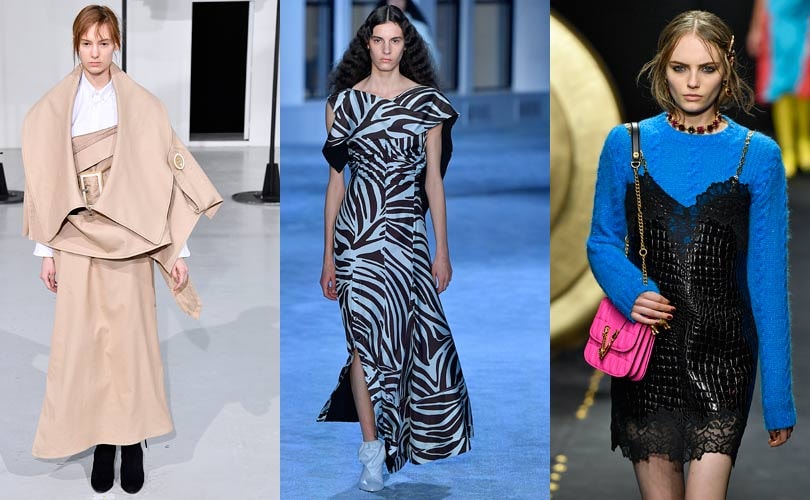 One more fashion week season is behind us, time to look back at the main trends from the New York, London, Milan and Paris runways. To determine which of the trending themes, colors, fabrics and prints are most likely to be picked up by major fashion retailers, data analytics firm Edited has taken a look at retailers’ product offering and newsletter content over the past year. Here are their conclusions: 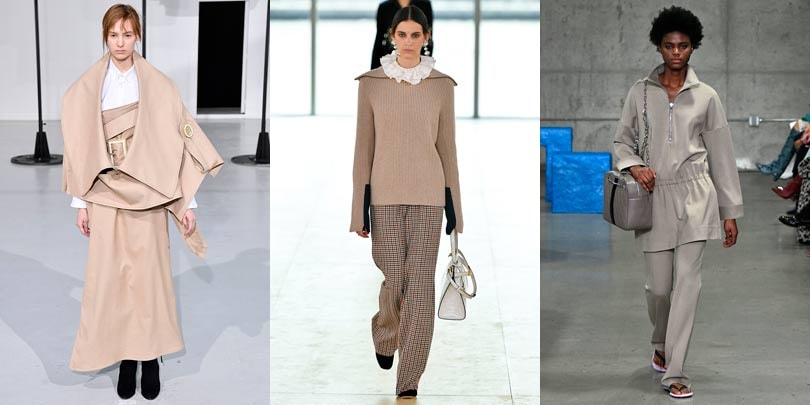 Think beige is boring? Think again. Head-to-toe beige looks dominated this catwalk season, a trend expected to remain strong in the Spring and Summer of 2020 as well. Neutral tones, especially those coming from natural, organic fibers are expected to rise in popularity as consumers long to simplify and declutter their lives.

Edited noticed an 11 percent increase year on year in new beige items in UK mass retailers. Newsletters from British fashion retailers also featured 14 percent more beige items in the last 12 months, compared to the previous year. The beige trend is even stronger in the United States, where mass retailers have increased their offering of apparel and accessories in this color by 27 percent. As for newsletter mentions, Edited reports a 10 percent increase. Time to tone it down!

Beige is more likely to appear in tops (42 percent of new beige arrivals were tops, considering the US and UK combined), followed by dresses (15 percent), bottoms (14 percent) and outerwear (10 percent). 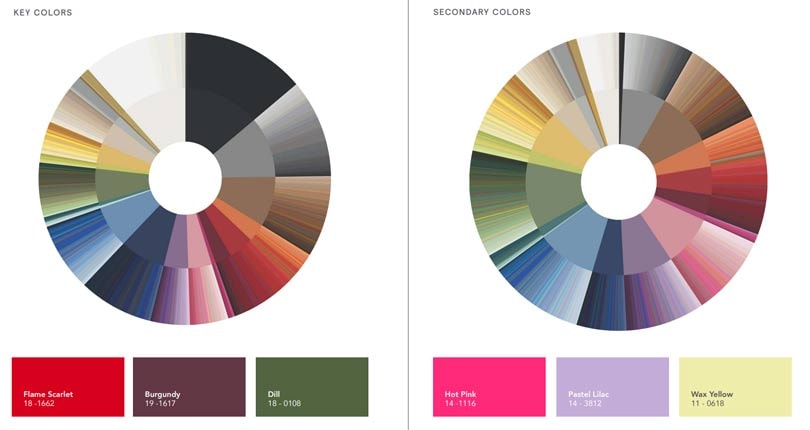 Apart from beige, deep autumnal tones such as maroons, rust, mustard and olive greens were very popular this season. Those colors were often contrasted with hot pink, another shade we’ll probably see everyone wearing soon. Hot pink was the color of this year’s Academy Awards, worn by more than 10 actresses, and consumers are already demonstrating an interest in the color. 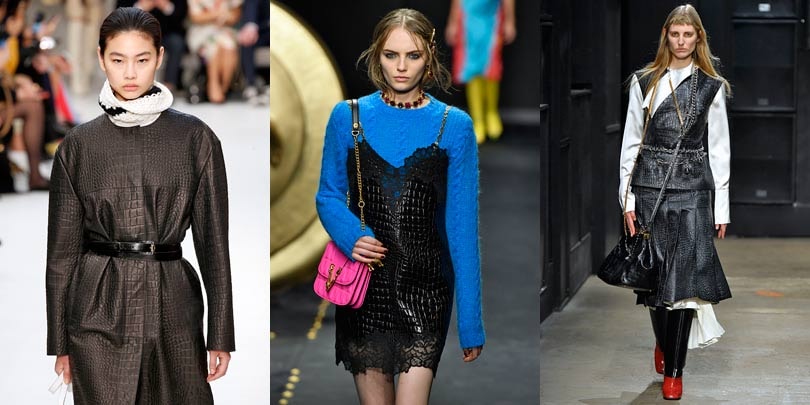 Croc texture is making a comeback

Croc texture is already on the rise in footwear and accessories. Edited reports a 200 percent increase in new products with croc embossed textures from Fall 2017, most of them shoes and accessories. The latest fashion weeks show us that the texture is likely to rise in apparel too: Versace, Marni and Tod’s used it abundantly in skirts and outerwear.

Fluffy textures had a strong presence on this season’s catwalks too. One cannot talk about Autumn/Winter 2019 without mentioning plush coats and faux fur. One of the most popular fashion items of 2018, teddy fabrics are still going strong, having appeared on the MaxMara, MiuMiu, Shrimps and Balenciaga shows. Edited reports a 42 percent increase in teddy fabric apparel from Fall 2017. 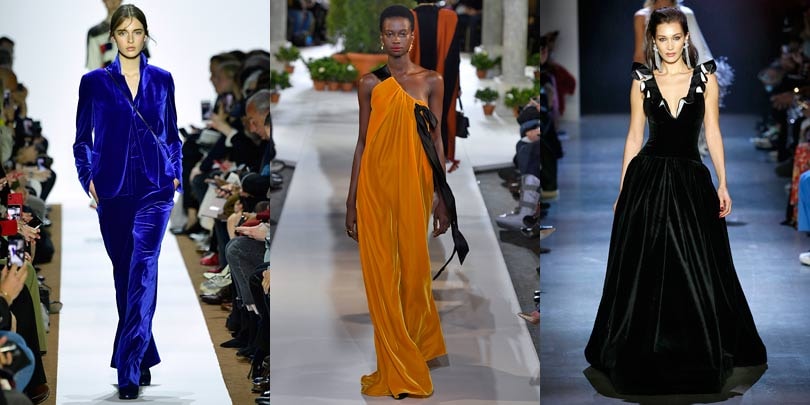 Velvet continues to enjoy a popularity wave. Over the past three months, there has been a 60 percent increase in the sell out of velvet in the mass market, driven by jumpsuits and slip dresses, according to Edited. While we’re only looking into womenswear here, the Oscars’ red carpet serves as proof that the fabric will be popular among men too. Velvet was spotted on the Miu Miu, Tom Ford and Alexa Chung fashion shows, to name but a few. 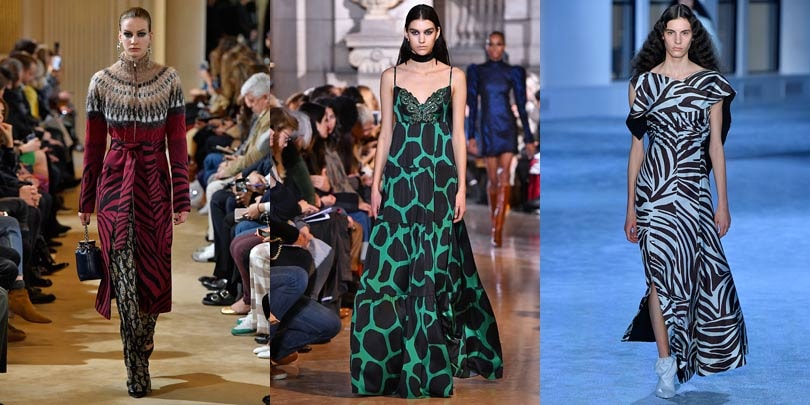 Animal print isn’t going anywhere either. Asos reported a 233 percent increase in animal print sales last year, but Edited shows the UK-based retailer is far from being the only one. The graph below shows how animal print has grown year on year in each category: 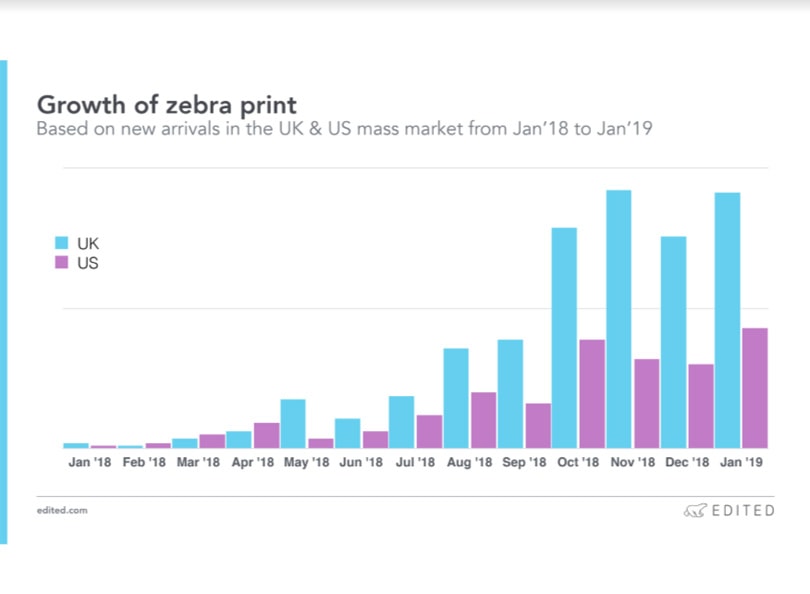 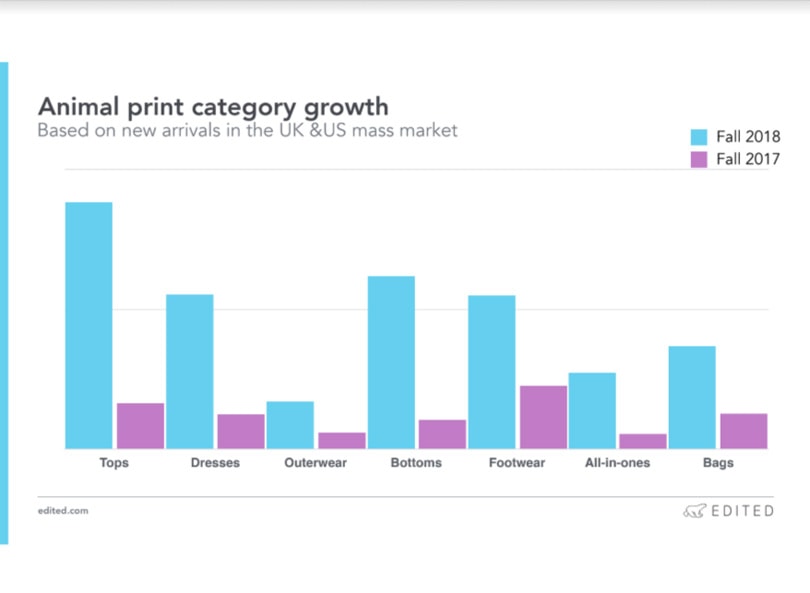 While leopard print dominated last year’s offering, this year it looks like zebras are taking over. Analyzing the data from December 2018 to February 2019, Edited reports there’s been a 15 percent increase in zebra print in the UK and 11 percent increase in the US. Top performing products in zebra across markets include knitwear, midi dresses, shoulder bags, and belts.

Animal prints are set to dominate footwear as well. Snakeskin boots still reign supreme on the runway with slouchy silhouettes dominant. Edited has seen a 293 percent increase in new snakeskin boots styles in the UK & US mass markets from Fall 2017.