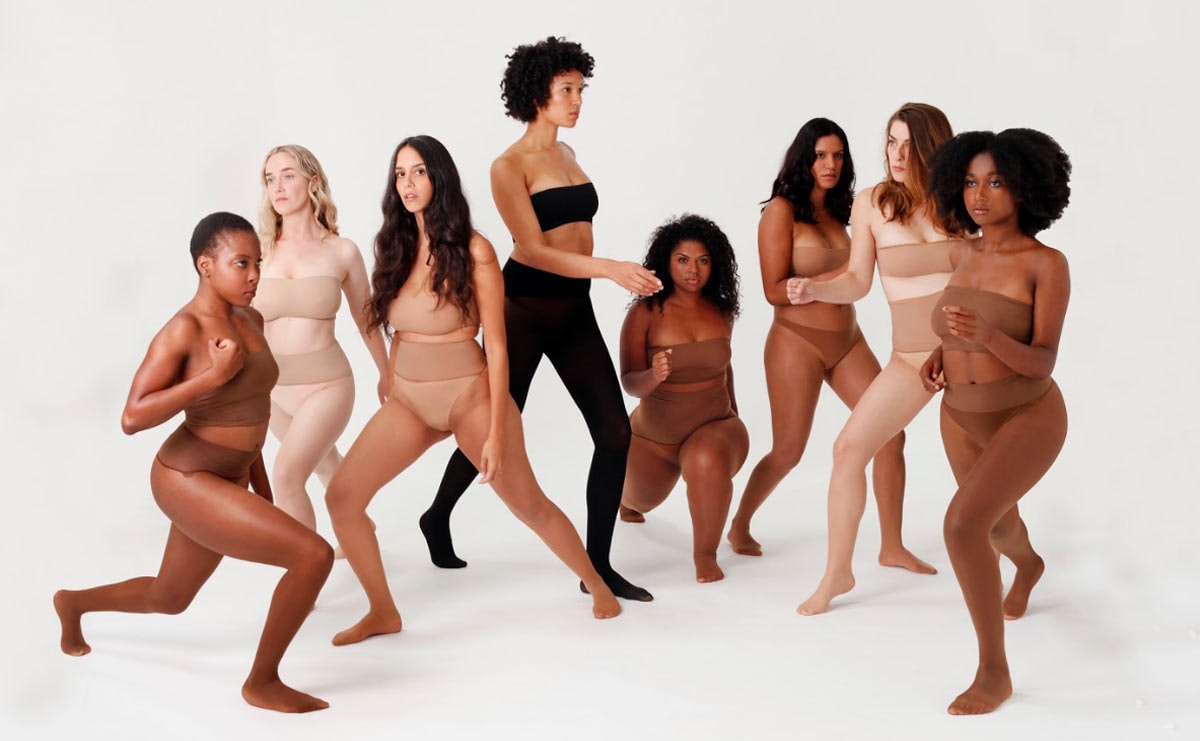 Tights have been a part of our wardrobe for centuries. They started as a men’s affair, but became a womenswear staple when hemlines started rising around the 1920s. Nylon and Lycra, invented by DuPont in the 1940s and 1950s respectively, contributed to make tights even more popular by conferring strength, elasticity and sheer to the garment. Today, the average British woman spends some 3,000 pounds (approximately 3,800 US dollars) on tights and pantyhose in her lifetime, according to an Asda survey from 2016. In the US, over 400 million pairs of tights and pantyhose were sold in 2018, according to Statista.

It seems like women have a love affair with their tights, but look closely and you’ll realize it’s actually a love-hate relationship. Tights tear easily, they sag, they “catch” on things and get holes at the toe. “How do you make pantyhose last longer?”, asks a user on Reddit. “They seem to last only 1 to 2 wears and at 7-ish dollars each, that adds up fast”. She’s hardly the only one taking to the world’s biggest discussion website to find the answer to that question. Quora and Yahoo Answers are also filled with similar inquiries.

Some even argue that tights are fragile on purpose. The 2010 Danish documentary The Lightbulb Conspiracy, directed by Cosima Dannoritzer, mentions tights among its examples of planned obsolescence. The film argues that the first versions of Nylon pentyhose developed by DuPont were so durable that the company sent its chemists back to the drawing board to make them weaker -- otherwise, they wouldn’t sell enough pairs. With the rise of fast fashion, tights have gotten even more fragile. In a 2018 survey of 3,000 French women conducted by NGO Halte à lÓbsolescence Programmée (“Stop built-in obsolescence”), 72 percent of respondents said that their tights last an average of six wears before running or breaking.

Startups look to solve customer complaints about the hosiery market

Wherever there’s an unsatisfied consumer, there’s a business opportunity waiting to be grabbed. Startups have been popping up in recent years looking to fix those problems and disrupt the hosiery market, which they argue hasn’t innovated much in the last few decades. “We’re in 2019 and people are wearing undergarments from the 60s”, said Fiona Fairhurst, Vice President of Innovation of Heist Studios, during a phone conversation with FashionUnited.

Heist Studios is a digitally-native, direct-to-consumer brand founded in 2015 in the UK. Using feedback from a group of 67 women, the company developed tights that promise to be comfortable and long-lasting: “no rolling, no twisting, no digging”, says the brand on its website. In fact, Heist is so confident about the quality of its product that it names it “the best tights you’ve ever worn”.

Priced at 20-24 pounds (36-42 US dollars), they come in ten shades to make it easier for customers to find a pair matching their skin color. The center seam, one of the most frequent complaints, has been removed. “Rather than knitting, cutting and stitching together two legs with a front and a back seam, as with conventional tights, we knit ours in a single tube, removing the gusset. Then, to get rid of those remaining, and truly annoying, toe seams where the machine starts knitting, we tuck them under each foot”, explains the brand in a press release.

As for the waistband, it is treated as a separate component to the legs. It is available in two heights: low, for those who prefer the tights to sit on the hips, and high, for those that want it to hug the waist. “Our waistband is a game changer, but it’s not just that. The way we knit, all the way back to the way the yarn is created, we have a much higher number of threads… Just touch them and you can instantly feel they’re more premium”, said Fairhurst.

Heist wraps 5,000 spirals of Nylon around each inch of elastane, which the company claims is ten times the industry average. “Add to that slowing down their knitting machine to operate at 400 rotations per minute (the industry average is 700 to 1,200), to ensure even coverage and fewer missed stitches”, added the brand in the press release.

With 25 employees and a manufacturing rate of 60,000 units per month, Heist claims to sell one pair of tights every 15 seconds in the winter months. Sales have been growing an average of 20 percent month on month since October 2015. The company has raised 8.1 million US dollars (6.4 million pounds) to date, with Net-a-Porter founder Natalie Massenet and Alexa Chung investor Pembroke VCT among the investors, as well as the founders of the Innocent Drinks company.

Heist has also made headlines after its tights were worn by the Duchess of Sussex, Meghan Markle. According to the brand, the palace has confirmed that a recent order of tights was meant for Meghan and that the Duchess has been wearing the product in recent appearances.

Across the pond, in Canada, Sheertex, a company founded in 2017, set out to build an “indestructible” pair of sheer pantyhose after raising 200,000 dollars on Kickstarter. “All of the fibers on the market today are either strong or sheer, not both”, said the startup in a statement. After a year of research and development, the company came up with a fiber that was resistant, flexible and sheer, but too strong for regular machinery. So, the next step was to develop a manufacturing process which would withstand the strength of the material without compromising the wearability of the product. It worked. Now, Sheertex claims its “stronger-than-steel” pantyhose can last up to 50 wears. They are sold online and priced at 99 Canadian dollars (approximately 73 US dollars or 58 pounds).

Beyond comfort and durability, tights have another problem: they are not environmentally-friendly. Nylon yarn is petroleum-based. Enter Swedish Stockings, a brand from Stockholm aiming not only to solve women’s complaints about tights, but also to address the sustainability issues from the industry.

The company was founded in 2013 by Linn Frisinger and Nadja Forsberg, inspired by the documentary The Lightbulb Conspiracy. “They [tights] went from being a top quality product in the 1950s to the number one item of clothing that women throw away”, said Frisinger to FashionUnited over the phone. “The evolution of tights had been standing still for a while, both in terms of sustainability and also in terms of quality and design. I felt there was a lot to do, a lot of angles to attack.”

Frisinger thinks most companies failed to innovate because tights are a “boring” product. “They’re easy to forget and big players didn’t have a lot of competitors. I also think that women aren’t really aware of how this product is made. Most of them don’t know that it’s 100 percent petroleum. For most customers, finding out about how bad this product is for the environment is an aha moment.”

All of Swedish Stockings’ products are made from recycled Nylon from pre-consumer waste. They are produced in Italy, in a factory driven by solar panels and renewable energy. The tights range in price from 12 to 39 euro (13-43 US dollars or 10-34 pounds), and they’re sold worldwide via the Swedish Stockings website and a network of over 600 retailers. The US, Canada and the Netherlands are its strongest markets, but the company has recently expanded to Japan, where it’s focusing most of its growing efforts.

The brand has also recently launched a line named Innovations by Swedish Stockings in which other recycled materials will be employed. The first release was a pair of tights made of 100 percent recycled elastane from pre-consumer waste. The next step is to develop tights from recycled plastic bottles. In two years, the company aims to make fully biodegradable tights.

In addition, Swedish Stockings has a recycling program in which customers are invited to send used tights back, regardless of the brand. “We’re not able to produce new tights from old tights yet. A lot of customers think our tights are made from old ones, but that’s not the case. They’re made from the spill-over of nylon production from others, but the idea is to become fully circular in the future. The recycling program is a way to show the customers and the industry that we are doing something about it, we’re collecting the tights so that they don’t end up in landfill. We’re actually using those used tights as filling material in glass fiber tanks, which is the best we can do at the moment”, explained Frisinger.

As the aforementioned brands, Swedish Stockings paid extra attention to the waistband and toe reinforcement to increase the quality and comfort of the product. The fabric uses four instead of two layers of thread and most products are also 3D knitted, which means the hosiery is knitted in a tube to ensure a good fit. “Making sure products last longer is a very important part of sustainability. We don’t want to make things just because they’re sustainable. Our main focus is quality, sustainability is an added value”, noted Frisinger.

According to her, Swedish Stockings has been growing 100 percent each year. With 10 full-time employees, the company aims to grow by 200 percent in 2019. Online sales account for 25-30 percent of its turnover. As for the future, Swedish Stockings aims to collaborate with other brands (a collection with Ganni is in the works) and inspire other hosiery brands to adopt more sustainable practices. “We don’t want to be the only ones for much longer, we want to be seen as the first”.